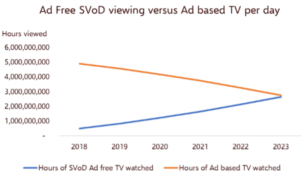 A dramatic shift in the split of SVoD versus broadcast is approaching in the coming years, driven by a concept few in the TV business seem to understand, that for every hour of SVoD content viewed, it represents one traditional TV hour lost from advertising. So dramatic in fact that ad-free SVoD hours watched in the US are forecast to surge from under 1 billion in 2018 to approximately 3 billion in 2023, to the detriment of ad-based TV which will fall from around 5 billion to 3 billion hours in the same time frame.

These cautious findings come from another warts-and-all report from our research arm Rethink TV, releasing its SVoD forecast to 2023 this week, titled The rise in SVoD viewing to swamp traditional TV by 2023, which we feel brings into question the methodologies of certain contrasting studies.

The substantial swing is shown in the graph below, which was built by taking Netflix subscriber figures, averaging two TV sets per home, then calculating about 4 hours of TV watched on each TV in 120 million US households – bringing us to 1 billion hours of TV viewing a day.

But, the report warns, this is not a simple case of traditional broadcast slowly emptying and live OTT slowly filling up. For a start, OTT delivered impressions can be sold either as programmatic, or with live content as addressable advertising, potentially bringing in more per impression. But to counter that, sports tend to be sold to pay TV via a carriage fee for each home, for everyone on basic cable. Change that from a $5 a month target, to a $30 a month direct target OTT, and you are reaching only the most dedicated sports fans. Different audience entirely.

Rethink TV therefore anticipates the US market rising from a combined paid SVoD (including vMVPD) reaching 236.6 million subscriptions by the end of 2023, from a base today of some 146.5 million. Netflix today represents 44% of subscriptions, but only 31% of the increased subscription levels in 2023. We anticipate 115 million members of Prime in the US, but just count 34.5 million of these as regular viewers of Prime Video. This could be accelerated if Amazon cuts deals with pay TV operators to put its app on their set tops, as it has in Israel and the UK. If it was able to get tight integration on set tops in the way Netflix has managed, this usage rate would balloon to well over 50% of Prime members.

Serendipitously, a similar report from Digital TV Research arrived in the Faultline Online Reporter inbox this week and its numbers are cautiously underestimated and skewed in favor of pay TV. While Rethink TV projects a rise of 90 million paid SVoD subscribers in the US over 5 years to 236.6 million, Digital TV Research predicts only 169 million SVoD subscribers in North America, so that’s including Canada. No way, not when Netflix alone already has some 64 million domestic subscribers today and still growing fast, soon to be joined in the market by a host of major competitors this year, and with many consumers now signing up to two or even three services at a time. Although an obvious explanation is that perhaps this separate report has not accounted for vMPVD subs.

While we tend to focus on the explosive mobile-first OTT video growth in the Asia Pacific region, Digital TV Research painted a picture of the region’s pay TV market – with an expectantly diverse set of results. Of the seven major APAC countries measured, just one key market is experiencing a slowdown in pay TV subscribers, according to the Asia Pacific Pay TV Operator Forecast. That market is Japan, which saw pay TV subscribers slide from 24.74 million in 2016 to 24.71 million a year later, projected to drop further to 24.43 million by 2022.

A decline of just 310,000 over a six year period, in an advanced country like Japan where giants like Rakuten, NTT and SoftBank are leading the way in network infrastructure build outs to pave the way for a streaming onslaught in the coming years? Somewhere, somehow, someone has fudged their numbers. Admittedly, OTT video uptake in Japan has been surprisingly slow for a country with such a high broadband penetration and has been at the leading edge of mobile-first viewing for years, but still these numbers are hard to believe.

Japan is the third largest market in terms of pay TV subscribers in Asia Pacific behind China and India. China is projected to grow from 325 million pay TV subscribers in 2017 to 353.4 million by 2022, while India is expected to add about 26.8 million in the same period to reach 179 million pay TV subscribers. The premise of the entire Digital TV Research report is to highlight the opportunity for digital switchover, while Rethink TV highlights the much more quickly emerging opportunity in SVoD – despite subscription services being second to the abundance of ad-supported OTT video offerings in the region. That said, there is a major change in viewing habits sweeping not just Asia Pacific but the world, as we highlighted earlier.

While Digital TV Research reckons the total Asia Pacific pay TV market will grow by 90 million to 666 million subscribers by 2022 (covering 22 countries), Rethink TV forecasts 340 million SVoD subscribers in the region by 2023, dominated by China with 245 million of this total.

Rethink TV’s research outlines a market where paying a small fee for none or less ads on an otherwise AVoD service is all the rage in China and to some extent India, and it notes how there are attempts to take the North American market in this direction. Yet this model is nowhere near as successful as in China – where something between 2 billion to 3 billion registrations exist for AVoD services.

For more information and purchase details for Rethink TV’s The rise in SVoD viewing to swamp traditional TV by 2023 forecast and report, please contact [email protected].