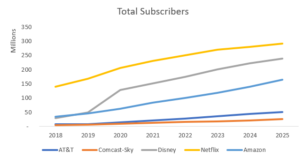 Disney’s arrival on the global streaming stage could not have come at a more opportune time, and Disney+ will drive the firm to some 247 million subscribers by 2025 – second only to Netflix. These findings come from our sister service Rethink TV, which is in the final stages of putting out a forecast on the pandemic’s implications for the global OTT video market.

For the current king of SVoD, this encroachment will lead to its first stall in North America, although global growth more than makes up for it. With Amazon’s projected uptick, the collective streaming providers are the nail in the coffin for traditional pay TV approaches, and it is hard to see how viewers with two or more SVoD services can ever return to the conventional pay TV model.

The three streaming providers have had the biggest opportunity to rip market share from the pay TV market handed to them on a plate, and their projected success here means that they will fundamentally alter the viewing habits of hundreds of millions of households. Amazon should be able to convert millions of Prime subscribers into habitual Prime Video viewers, although needs to ensure its apps are available on enough TVs and set tops, and ensure its user experience is up to scratch.

Similarly, Disney will have to ensure that Disney+ has enough content to keep its subscribers coming back. It will have to follow Netflix’s example, in fleshing out the libraries, and Amazon has made similar moves to improve its own regional catalogs. Soon, Disney’s Hulu and ESPN operations will pale in comparison to its flagship service, but as it stands, Disney+ looks like the SVoD service that has the shortest shelf-life of the three. This slight is made up for by its price, however, and it is a problem that can be readily fixed – if Disney can get its content at the right price. Still, churn is going to be turbulent.

Our forecast projects that Netflix will reach 291.4 million subscribers in 2025, taking first place, with an estimated $34.9 billion in revenue. Disney’s total subscribers are expected to reach 247.2 million, accounting for some $14.4 billion. Amazon’s Prime Video viewers are on track to reach 163.4 million in 2025, which equates to around $10.5 billion in revenue, depending on how you slice the total Prime subscription value. AT&T’s HBO Now is also a new arrival, and we expect the firm to net 50.3 million global subscribers, with revenue of $8.9 billion. Comcast is the fifth company tracked in this forecast, and we expect its SVoD services to reach 23.4 million subscribers in 2025, with revenue of around $3.5 billion.

Combined, this is a market that reaches 775.8 million global subscribers, worth $72.3 billion in 2025. That growth comes at the expense of traditional pay TV services, and the uplift expected from the Covid-19 lockdowns will have long-lasting affects. Once kids are locked into an SVoD library, and Disney’s does look particularly enticing, parents are going to be quite reluctant to cancel that service, and when the prices are this low, the SVoD services become very sticky offerings. When measured against our historic projections, we believe that the lockdowns will result in an 8.7% increase in subscriptions, and a 7.9% increase in revenue, in 2020.

This is still a complex market, and competition between the three leading firms is going to be fierce towards the end of the period. The success of Netflix and Amazon in developed markets mean that there is considerable overlap between the customer bases. Those with Netflix likely have access to an Amazon Prime account. But while Amazon has struggled to convert Prime subscribers into habitual Prime Video viewers, the Covid-19 pandemic has provided an opportunity to explore all the free content available to a viewer.

This might mean that a bored Netflix customer starts poking around the Prime Video app, and moves their viewing hours across – logging in on the same device, watching ‘new’ titles, and possibly even purchasing movies or series through the at-times annoying UI. But there will be plenty of other Netflix subscribers that take a punt on Disney+, thanks to the low monthly prices and strong flagship titles. In reverse, a Prime subscriber that does not have a Netflix account, for whatever reason, is also an ideal candidate for Disney+, and because Disney’s offering does not overlap, it seems most likely to be taken as an auxiliary option – something to entertain the kids, or replace the monthly trip to the movie theater.

In the background of all this are AT&T and Comcast, which are in the process of launching their own SVoD offerings. However, both seem very focused on the US market, and seem set on ensuring that their own broadband customers are the initial target markets – motivated by concerns about cord-cutting.

Comcast’s Sky division is enjoying success with its Now TV offerings, but its Sky X proposition has not yet made it out of Austria. It seems clear that Sky X could become an OTT option for Sky’s Pay TV offerings, and later absorb the Now TV elements too, but that roadmap is for Sky-eyes-only, it seems. It is unclear whether Sky is motivated to consolidate its lineup in this fashion, however.

AT&T seems content to let AT&T TV Now wither on the vine, and will push customers that cancel towards HBO Max. Similarly, 2020 is the year that HBO Now customers get switched over to HBO Max, which means that AT&T will effectively only have the one SVoD offering – HBO Max. HBO’s international agreements mean that AT&T remains focused on the Americas, but will be pushing HBO Max in Europe ‘where HBO already directly operates premium TV or streaming services.’ In other countries, it will continue to work with HBO licensing partners, but HBO Max will make a scattered appearance in Latin America and APAC, in time.

In terms of regional performance, the uplift from the Covid-19 lockdowns seems even across the board. As for the afterglow, Amazon enjoys the longest increase in subscribers, which carries over into revenues, although as we mentioned earlier, Amazon is a bit tricky to illustrate when it comes to the finances.

The lockdowns will create a noticeable bump in subscribers and associated revenue. This will be welcome news for AT&T, Comcast, and Disney, given that their theatrical business is going to be severely impacted by the lockdown restrictions on movie theater attendance. Early experiments with releasing blockbuster titles into streaming channels have been promising, but the surrounding bickering between cinema distributors, awards bodies, and the production outlets means that this model is unlikely to be sustainable in the long run. That ecosystem will look to get back to the conventional sales channels as soon as they can, rather than embracing structural change.