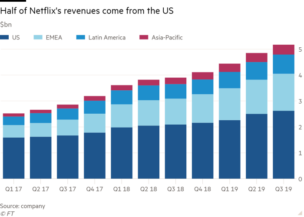 At last Netflix has revealed the regional details analysts have long had to make intelligent guesses over, but the move has been forced on the once rather secretive streamer by pressure from the great new insurgents. These are Disney+, Apple TV+ and AT&T’s HBO Now with Comcast’s Peacock to follow, whose combined market force Netflix will feel first in its saturated domestic US market.

Netflix was less keen to draw attention to two other factors concerning its overseas markets that Wall Street investors might see as more negative. One is that Netflix is facing a concerted effort in some markets, especially European countries, from indigenous broadcasters to provide local competition, although that will be causing CEO Reed Hastings much less loss of sleep than the charge from the big global streamers.

The second factor not entirely disconnected from the first is that Netflix has been forced cut prices to around a third the US rate in some markets, notably India and Malaysia, to compete with local streamers and pay TV providers. That means profit margins per subscriber are now substantially less than in North America where it has at least been able to maintain subscription price growth in line with inflation, as it has in most other developed markets. That last factor will temper the impact of its regional revelations with investors.

Nonetheless, the regional data does make happy reading and reflects a successful international expansion strategy that has put Netflix in a much better place to resist the imminent streaming tide in many countries than would have been the case two or three years ago. Netflix has established roots in a number of such markets through partnerships with local content developers, which will ensure it is well placed to produce local material more affordably than say Disney, which until recently has been highly US-centric. The content partnerships are likely to be more durable than agreements with local operators or distributors, which can more readily be scrapped in the light of changing commercial factors.

The international business results by region, contained for the first time in a filing with the US Securities and Exchange Commission (SEC), are not a total revelation given that reasonable guesstimates have been provided by both analysts such as ourselves and regulators in some cases, but they do add some illumination and underline how Netflix has become dependent on its international markets for growth. Over half of the 158 million global subscribers are now outside the US, and they account for 90% of growth since the first quarter of 2017. However, because of prices holding up in the US, that country still accounts for more than half of global revenues, as shown up on this graph compiled from the Netflix data by the FT.

The US and Canada together still account for more than half of Netflix’s subscribers at 67.1 million and brought in $7.4 billion revenue over the first three quarters of 2019. Membership rose just 23% in those two countries from Q1 2017 to Q3 2019.

The Asia Pacific region, including South Korea, Japan and India, but not China which Netflix has given up on for now, is the fastest-growing segment but from a lower base given this was the last major region to be broached. Netflix now has 14 million subscribers there, more than triple the March 2017 number, which the company has set as time zero for comparisons. This is still just 9% of the global total and in revenues represents even less than that given the lower prices in some of the countries.

Europe, the Middle East and Africa is the clear second region now, having put on 140% in subscribers to 47.4 million from 19.7 million, and 196% in revenue over that comparison period from Q1 2017 to Q3 2019. Netflix has actually succeeded in raising prices in real terms in key European markets, explaining why revenues have risen faster than subs in the region.

In Latin America, both subscriber and revenue growth has been far more modest, reflecting partly strong early gains combined with an economic slowdown or even contraction in some key markets. Subscribers were up about 50% at 29.4 million from 19.7 million and revenues 25% higher at $2 billion from $1.6 billion. The disparity between revenue and subs growth reflects some pricing pressure there too.

Netflix first launched outside the US around 2012, but scaled up its international expansion massively late in 2016, explaining why it took Q1 2017 as the starting point for comparison. This shows up Europe and Asia Pacific in a favorable light and underscores how global scale has become essential for the company’s strategy, which involves matching big spenders such as Disney on original content production.

One fear is that Netflix will come under pricing pressure even in developed markets as rivals roll out, noting that Disney+ is $6.99 a month in the US and Apple TV+ – admittedly with far less content – just $4.99 a month, compared with $12.99 a month for Netflix’s most popular plan. Meanwhile, Comcast is planning to include a low-cost ad-supported plan with Peacock.

Against this background, Netflix shares have slipped 16% from July, when the company’s Q2 report revealed the first fall drop in US subscribers for almost a decade, although that was at least temporarily reversed in Q3.