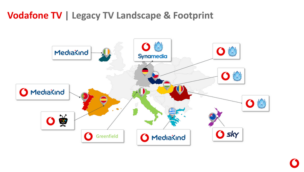 Lockdown certainly would have been more lively for all corners of technology if more operators were as active as Vodafone in the webinar scene. Tuning into a Vodafone virtual event has therefore become almost routine, and it’s not just the tier 1s that should take note, but the smaller service providers too.

While Faultline has learned and reported almost everything there is to know about Vodafone’s Kaltura-driven cloud TV project and the 6 years spent harmonizing the messy fragmentation of video vendors across its footprint, still a handful of inconsistencies remain in a journey that has “a long way to go,” according to Vodafone’s Wolfgang Zeller, Head of Video Excellence.

With Vodafone TV (VTV) hosted on AWS infrastructure, Zeller’s absolute affinity with the cloud drew a barrage of questions from the audience, many hanging on by a thread to the on-premise deployment dream.

“Don’t even think about running something on-prem. It’s frightening at first, but if you fail you will fail painfully. We launched VTV in four countries in one year. Even a company the size of Vodafone cannot do that on-prem – this is mission impossible. You must do it in the cloud. Nothing is wrong with private on-prem cloud, but you have to question scalability here. What we do in a year, AWS does in a month, it’s impossible to keep up,” ceded Zeller.

Of course, Vodafone could try its hand at developing back-end components in-house, but that’s why cloud-based managed services specialists like Kaltura exist, and Kaltura was one of the early movers into cloud-based video many years ago that proved a pivotal change of direction. “We are not experts in running Kaltura software,” added Zeller.

When operator executives do make rare public appearances (Vodafone aside), they tend to avoid talking about legacy technology like the plague. It was refreshing then to hear Zeller not just discuss Vodafone’s legacy TV footprint freely, but bring up a map plotting out the fragmented legacy situation that he admitted remains a big challenge.

Four out of ten countries within the legacy landscape are newly inherited Liberty Global operations, where the RDK-based Horizon TV platform is in the arduous process of being upgraded to Vodafone TV. Vodafone remains tentative about giving us even a ballpark timeframe for when the project will complete.

Of these, Germany is a different beast. Vodafone is currently in the implementation phase carrying out a massive back-end migration project in Germany, as it gradually transitions as many legacy set tops as possible to new back-end features and functions, with new ways of promoting and advertising content on existing hardware. “This is an interesting approach and has proven quite a successful line of thought in the middle stages,” said Zeller.

He noted that Vodafone is staying on RDK for the current Giga TV platform in Germany, while admitting that Vodafone may not be using RDK to its full extent but he doesn’t see a big problem in Germany right now to warrant any dramatic change in technology.

One simple strategy to overcome these challenges is to minimize changes to set top clients. However, hands-down the best strategy going forward from Zeller’s point of view is to push migration efforts a layer higher, somewhere in-between the set top and the back-end where these services can be handled efficiently in the cloud. Another simple solution to overcoming legacy device challenges is to simply upgrade them all to zapping devices at a lower capex cost, although this comes with the caveat of losing more advanced features.

“This is still very challenging for us. The key takeaway for me is getting the integration layer in-between legacy set tops and the new VTV back-end, but this will prove successful going forward,” added Zeller.

Outside of Germany, Spain’s legacy set tops are currently involved in an “enrichment project,” while Zeller described New Zealand as the only unique cloud migration country from Vodafone’s legacy TV landscape.

“This is a game of scale. What are you going to do with these so-called legacy TV platforms, which have a slow innovation cycle and are on-prem, but are still good to go? We decided to grade Vodafone TV and do everything in the cloud 5 or 6 years ago, which was a new approach at the time. We needed to choose a vendor landscape that would buy into this journey, and settled early for Kaltura at the core,” he added.

Clearing up confusion about Vodafone’s continued relationships with major vendors, Zeller said, “Yes, we still have relationships with MediaKind and Synamedia, but I would like to reiterate that the only type of platform going forward for Vodafone is VTV with Kaltura at the core.”

Vodafone TV as of early this year had 22 million subscribers, along with 27 million fixed broadband customers and 625 million mobile subscribers.

Kaltura’s SVP of Accounts Shuki Eytan has been deeply involved in the rollout of VTV, and although Kaltura has been established at Vodafone for a number of years, it was only September last year when the Kaltura flag was firmly planted in the Vodafone account as the de facto cloud TV supplier across its European footprint (public anyway, as Kaltura told us it actually nailed this expansion ages ago).

“Everyone likes to talk about the cloud, but Kaltura was born in the cloud,” Eytan explained, half-expecting him to burst into the full Bane monologue from The Dark Knight Rises.

“Not only do we bring improved ARPU and NPS, but also improved churn and faster time to market, launching in a new market within a few weeks. This is not just about migrating services to the cloud, this a cross-department project. Imagine the magnitudes of savings by having one platform across the world,” Eytan finished.