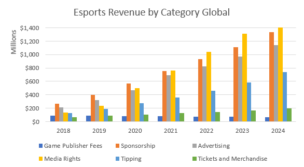 Esports is approaching the end of a glorious Northern Hemisphere summer that has seen it register a big rise in public consciousness after several high-profile events that gained much greater general media traction than ever before. This was a good time then for our research arm Rethink TV to publish a comprehensive report and forecast assessing future prospects diced by geography and revenue category with a nod to demographic changes in the field.

The headlines are that global esports revenues will rise five times between 2018 and 2014 to reach $5.1 billion, while media rights – of greatest interest to video service providers – will be the biggest gainer up 12 times at $1.63 billion by then. The revenue will grow faster than the esports audience, reflecting individual fans paying more on average by 2024.

The other notable aspect of the Rethink TV report entitled “Esports on verge of hypergrowth to $5bn plus gambling – Revenue Forecast to 2024” concerns betting, which will generate as much revenue as all other categories put together. However, betting is distinct from other revenue categories in that the money goes to bookmakers or pundits rather than direct participants in the field such as esports organizers or streamers.

Esports betting has already become mired in controversy over fears it will recruit underage gamblers. Indeed, a report published in the UK by think tank Demos and the Department of Management at the University of Bristol, called “Biddable Youth”, urged roll out of additional age verification measures to prevent underage audiences from engaging with betting-related esports content. Rethink does project esports betting revenues to rise at a slightly slower pace than the fivefold average for other sources from $1.8 billion in 2018 to $5.72 billion in 2024, but that still leaves it ahead of all other categories put together.

Esports has evolved from video gaming as that has grown more sophisticated, but gaming includes solo activities involving just one player without an internet connection and without any competitive aspect save between human and machine. Esports is always internet connected, always competitive and always organized, involving professional players. Teams play for an incentive just as in traditional sports, which will be money, fame, or usually both. The dynamics are similar to professional traditional sports in so far that top players become celebrities, while success places individuals in demand and teams in position to qualify for further, perhaps higher-ranked or more lucrative tournaments.

Gaming still exists in parallel and is counted as a distinct field by analysts, such that Sweden’s Modern Times Group for example has separate columns for each in its annual report. A key distinction though is that esports attracts audiences that are growing fast and the source of the revenues as well as the interest for broadcasters and pay TV operators.

The growth in audiences that has already occurred underpins the rapid growth in profile of major events and the prize money on offer. The year 2019 will go down as the one esports burst through to mainstream public consciousness after various high-profile events culminating in the FIFA esports World Cup in August. It was the game Fortnite whose World Cup in July caused many people to sit up and take notice due to the sheer scale of the event and the prize money on offer, $30 million in total. This was almost identical to the prize pool for the women’s FIFA world cup for “real” soccer, which represented a coming of age for the female version of the sport, generating big global audiences.

This comes at a time when a comparable esports breakthrough has already occurred in a few major Asia Pacific countries, notably China and also South Korea, which to some extent serves as a sign of things to come elsewhere. Against this background, the Rethink esports forecast is highly timely since the field is poised to enter its next phase by attracting wider audiences on mainstream TV beyond its predominantly ultra-young, male and white or Asian demographic. As esports grows it will approach saturation among that young demographic and come to rely on expansion by attracting more casual audiences.

There is a continuum, or pyramid, that we identify in our forecast with the serious professional or semi-professional players at the top. The next level comprises esports enthusiasts, some of whom will enter serious competitions, but are essentially spectators who are somewhat addicted and prepared to contribute financially in various ways to teams and individuals, for example by donating voluntary gratuities or “tips”. Next come the casual viewers who enjoy the spectacle, but are more passive and unlikely to contribute financially. Finally, is the potential audience among the wider public, including perhaps fans of conventional sports that have an esports equivalent.

Esports is often likened to “real” professional sports and there are many parallels that emerge in our forecast, but one difference lies in greater fluidity between these audience categories. Casual esports viewers are more likely to progress to enthusiasts, who in turn are more prone to become active participants than in the case of “real” sports. At the same time as esports continues its overall commercial expansion, attracting greater advertising, sponsorship and rights acquisition, average revenue per enthusiast will increase.

Rethink TV’s revenue projections then for esports are derived by forecasting growth among serious fans and multiplying by the average revenue per fan as that rises, broken down by geography since there are significant regional differences. It also breaks the revenue down by category, which varies geographically, with some regional anomalies such as the fact sports betting in general was only legalized at the federal level in the US in May 2018, clearing the way for individual States to legalize the practice, applicable to esports as well. As a result, the US lags well behind other regions in esports betting, but will catch up over the next few years.

For those pay TV operators that have yet to make a play in esports, the opportunities will come primarily through growth in casual viewing, attracted by more understandable or “sanitized” esports competitions with appeal beyond enthusiasts. There will also be scope for gaining media rights and entering the field that way.

One other distinctive aspect of esports lies in its demographics and especially the distinction between players and spectators. The audience is much more representative than the active participants giving perhaps an idea of things to come, with top players still predominantly teenage, male and either white or Asian. The report discusses why that is and how it may change over the forecast period, as more women and ethnic minorities enter firstly as casual and then enthusiastic viewers before graduating to become professional players. On the gender front, China has led the way with 40% of its esports audience already female.