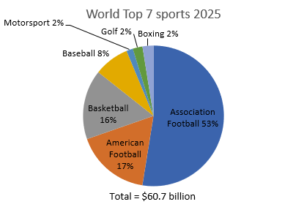 TV has transformed the landscape for video entertainment by changing the way content is made, distributed and consumed, driving cinemas to raise their game and crunching down movie windows to the point of disappearance. But the impact on premium sports has been much deeper, generating unprecedented riches for some while relegating others to the back row of engagement. Pay TV in particular was responsible for the gear shift, making multi-millionaires of many players in leading sports who were previously on a par with professions such as medicine or accountancy.

Now, through proliferation of live streaming, another transformation is taking place, leading eventually towards major and leagues going D2C (Direct to Consumer), although this will not necessarily oust streamers or video service providers altogether. The leagues will need technical assistance in content creation, distribution and also audience analytics to maximize the reach and value of their properties.

These are among conclusions of the latest report from Faultline’s research arm, Rethink TV, entitled Globalization lifts TV sports rights past $85 billion future – Sports Rights Forecast to 2025. A strong subtext of the report is that D2C services are creeping up on the sports rights industry, stealthily with deadly intent for broadcasters. Even technology giants such as Amazon, which are now disrupting the traditional field of sporting rights, will have to adapt to the growing reality of D2C if they are to have a future as major players in sports video distribution.

The report contains analysis and projections for the top 15 sports and also individual leagues for each of five major global regions, with graphs highlighting trends. With the notable exception of India, a major outlier for sports participation and TV viewing generally, the report finds that association football will be the biggest gainer in audience and also media rights revenues. European leagues will continue to dominate but actually make stronger gains in other regions as they catch up on viewership and therefore contribution to media rights revenues.

Taking the top 7 sports in isolation, association football will account for over half of these revenues at 53% by 2025, up from 41% in 2018. If we bring all sports into the equation, including those outside the top 7, the proportion of media rights revenues globally attributable to association football, or soccer in North America, will rise from 34.3% in 2018 to 45.9% in 2025.

Apart from association football, basketball will be a significant gainer over the forecast period, largely because it has managed to exploit TV outside the US more effectively than baseball, one of the other big three in the US. The Rethink TV report noted how basketball has incorporated some feedback from TV audience analytics to make subtle rule changes that improve the flow of the game.

However, American football will just about hold onto its status as the number one sport in the US by media rights revenues and will also gain some traction elsewhere. In the UK for example the new association football ground of the club Tottenham Hotspur has a grass playing surface that can divide and slide away to be replaced for NFL (National Football League) matches held there. For the NFL, staging a few matches outside the US is designed to boost popularity and generate additional revenues from media rights as well as sponsorship. For the association football clubs hosting the events it also provides valuable publicity that ultimately should create some additional foreign revenues. Indeed, that is why the new ground has been christened the “Tottenham Hotspur Stadium” rather than White Hart Lane, the name of the original ground on the same site. It promotes the club whenever the ground is mentioned in NFL broadcasts, highlighting another facet of TV’s shadow over sports.

One point about sports rights is that some are easier to forecast simply because the rights holders often commit a number of years ahead, so the future is to some extent known. Even in other cases, projections can sometimes be made partly on the basis of what has actually been paid for rights in other sports, considering assumptions over how popularity will vary.

In a number of cases rights are assigned in regional packages or even individually by country, while in others there may be blanket allocations for the whole world outside the host nation. In those cases, Rethink TV has apportioned rights to the selected regions of Europe, North America, China, Rest of Asia Pacific and Rest of World on the basis of their estimated contribution to their respective total values. Various factors were taken into account here in compiling the Rethink TV projections, including the values of their rights packages in the country or region concerned, numbers of subscribers to relevant channels or services, and estimated numbers of fans.

Another challenge lies in converting amounts paid for rights packages over multiple years to a value that reflects what would have been paid for those rights in each single year. This is necessary to determine a smooth curve that accurately reflects the rights values for each given year and their varying rate of change over the forecast period. After all, the value of rights do not effectively change in jumps each time they are negotiated, but continuously from year to year. They reflect various factors such as changes in the fan base for a given sport and average affluence of each fan in a given region.

The upshot is that the field of sports rights will be transformed again over the next few years as deals come up for renegotiation. Inevitably, next time round the big streaming players, notably Amazon, Facebook, possibly also Google and Apple, will come fishing for bigger catches and compete for some premium rights rather than just picking around the edges of premium sports properties. The big dedicated streaming companies will also come in harder, including DAZN, BeIN sports and Disney’s ESPN+. Discovery’s Eurosport, which has tended to shy away from the most valuable sports rights packages so far, may also come knocking on bigger doors.

But there is still hope for the traditional pay TV rights holders such as Comcast’s Sky, as the Rethink report makes clear. They can hawk their longstanding expertise in extracting the maximum value from sports rights in various ways including cross promotions, while also competing in provision of ancillary content and advanced features including Next Gen audio, multiple views, 360-degree vision and Augmented Reality (AR). They may though have to adjust their stance and work alongside the leagues as partners rather than rights holders.