Telenet, Liberty Global’s Belgian operation, has taken additional measures to improve the content discovery experience for 1.8 million cable TV subscribers by deploying AI-based enhancement technology from Media Distillery. This isn’t about enhancing video directly, however. This is about enhancing still images within the UI to more accurately and attractively represent TV programming in what is another belting endorsement for imagery technology as a seemingly simple UX weapon to drive subscriber engagement.

The Dutch video metadata extractor is supplying its Image Distillery technology as part of a multi-year contract extension. Media Distillery’s technology uses AI to dynamically and automatically generate some 3,000 still images on a daily basis, with each image representing any broadcast TV program to display within the Telenet UI.

But while recent technological imagery breakthroughs from the likes of Gracenote and ThinkAnalytics (which turned out to be synchronous) are focused on providing personalized imagery for on-demand content catalogs, Media Distillery’s efforts are purely geared towards improving engagement of broadcast TV programs, which shows us where Telenet’s priorities lie.

Media Distillery says its system captures, processes and optimizes images from any live broadcast feed, from where it creates screenshots depicting each program in what is deemed the most visually attractive way possible – framing everything in such a way to ultimately reduce disappointment among viewers who often jump into content blindfolded.

But surely beauty is in the eye of the beholder? How could an AI possibly decide what is visually attractive to millions of end users?

A pre-set quality criteria helps rank candidate images for each show, which have been given a makeover by the Image Distillery AI – including stripping out blank spaces, subtitles, graphics and anything else that might interfere with channel logos. The result is “eye-catching and informative representations which illustrate the program, episode by episode.” The top ranking candidate image is then selected and inserted into the operator UI, which – importantly – can be executed even during a show’s transmission. 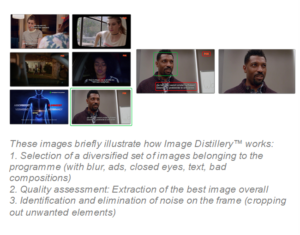 The actual AI-based selection going on under the hood is complex, using Deep Content Understanding to identify and label features, but the demand for such a system could hardly be simpler. This is about replacing stock images that overpopulate operator UIs because smaller broadcasters do not have the editorial resources to produce compelling visuals on an episodic basis. From the end user point of view, not only does the UI look better when injected with Image Distillery, but it also improves content discovery as previously programs might barely be discernable from each other. Well, that’s what Telenet is hoping anyway.

Media Distillery only briefed Faultline on its still image video analysis technology in February this year, when the product was still nameless. At the time, we were told this feature was created based on research showing that as much of 80% of young people make content selection decisions on visual stimulation, rather than reading content descriptions.

Surely though AWS has something more powerful and much cheaper somewhere in its Rekognition suite? Media Distillery’s defense is that the ML-based video recognition services from cloud behemoths like AWS are mostly rudimentary building blocks that output basic metadata, while the Dutch company delivers a turnkey video analysis system that claims to genuinely understand the market.

Telenet has a few years’ experience working with Media Distillery prior to this week’s win, having rolled out the better-known EPG Correction technology in 2018, which consumers find particularly useful with uptake of replay platforms, including linear on-demand channels, as the technology automatically adjusts start times for TV programs as they are broadcast, regardless of source.

Years ago, it would seem trivial to complain that a program scheduled to start at 8pm on the nose actually started 2 minutes late, but in this day and age of viewing demands, any delay is unacceptable. Similarly, demands for an immaculate EPG UI should not be overlooked in a world where pictures tell much more than a thousand words.