Amazon’s advertising business has been tipped by some as a fire raging within poised to outgrow the AWS cloud computing clout in a few years – a prediction which just got a little more interesting this week with news of the impending arrival of an aggressive ad-supported OTT video service in Europe.

Crucially, the Amazon-owned free streaming service IMDb TV, rebranded from IMDb Freedive, is coming after the lunch of TV networks – boasting 50% fewer ads than your standard TV network. IMDb TV has really gone for the jugular here and the fear is that the arrival of the Amazon-owned offering in Europe later this year is as much of a threat to broadcasters and network-owners as SVoD is to pay TV operators. Of course, IMDb TV is exclusively an on-demand service so won’t be stealing eyeballs away from the most popular live channels, for now anyway.

Naturally, IMDb TV will get priority treatment on Amazon Fire TV streaming devices with tight UI integration, as well as being available via the Prime Video app, already available in the US of course. This is a straight up challenger to the free streaming service launched by Roku, called The Roku Channel, as the two companies battle it out in the streaming dongle market – with Amazon edging it at 34 million users globally compared to Roku’s 29.1 million footprint.

In addition, Amazon has gone out all guns blazing with studio deals, striking licensing agreements with Warner Bros, Sony Pictures Entertainment and MGM Studios. It will feature popular titles like Fringe, Kitchen Nightmares, Duck Dynasty and The Bachelor, plus movies including Drive, Donnie Darko, Monster, Dances with Wolves, Sense and Sensibility, Draft Day and A Knight’s Tale.

But behind the content glamor of IMDb TV is Amazon’s formidable back office infrastructure housing the Amazon Advertising Platform (AAP), which has arguably failed to live up to its potential – due partly to the AAP suffering from being just a traditional exchange connecting advertisers with diverse sites including Amazon. AAP has little in the way of high precision targeting and a failure to aggregate customers within coordinated campaigns or exploit user analytics effectively, which Amazon is aiming to put right.

One of Amazon’s key strengths in video stems from its diverse revenue streams, covering subscriptions, electronic sell through, digital rentals, and bundles of third party TV apps – all combining to help gain market share in OTT video, some of which will involve advertising.

Almost a year ago, following presumptions that Amazon was ready to challenge the ad duopoly of Google and Facebook, we decided to do a little comparison of our own – breaking down ad revenues of the three companies and laying out their growth curves side by side. This is a fitting time for a revisit and, as you can see from the graph below, last year was Amazon’s most successful advertising year to date, surging to $10.1 billion from $4.7 billion in 2017.

In fact, Q4 2018 brought in $3.4 billion in ad sales alone – growing 95% year on year. Clearly Amazon’s ad business is growing at a phenomenal rate, yet is still dwarfed by Google and Facebook, so any comparisons are unfair. As the graph shows, AWS is growing at a similar rate.

Amazon reports ad revenues in its Other sector, which primarily includes sales of advertising services along with “sales related to our other service offerings”. AWS is growing speedily as we said and 2019 will be another record year for the sector, but the core advertising businesses at Google and Facebook are also growing at an unprecedented pace – and that’s despite so-called setbacks. 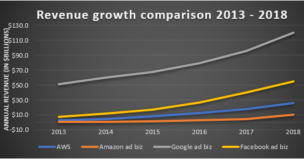