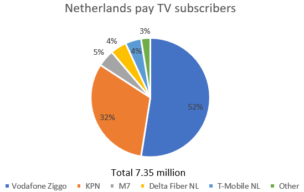 Our belief that Dutch cable operators UPC and Ziggo should never have been allowed to merge in the first place – even before the combined operation was acquired by Vodafone – have only been confirmed by subsequent events, including the very latest Q2 results.

Yet it was only in May 2019 when the merger between Vodafone and Liberty Global, the parent company of Ziggo, was finally cleared in a ruling by the European Court of Justice, after a complaint by the company’s dominant telco KPN against the earlier decision by the European Commission to approve the merger. Our argument was that the successive mergers of Liberty Global’s UPC firstly with Ziggo and then Vodafone created a combined company dominant in more than one category, broadband as well as pay TV. This is not usually permitted under European Commission competition policy.

The contentious nature of the first merger was at least acknowledged by the General Court of the European Union, which annulled the original approval granted by the European Commission, in its role as the EU’s competition watchdog, in 2014. However, the European Commission later cleared the purchase again subject to relatively minor conditions such as allowing other service providers to distribute Ziggo’s content over the internet.

It was then KPN launched its complaint about the UPC and Ziggo merger, only exacerbated by Vodafone taking control. It is arguable that the country’s smaller pay TV and broadband operators have an even more justifiable complaint over the stranglehold that the KPN/Vodafone duopoly now imposes on them.

Against this background, the latest Q2 2019 results from the country’s pay TV operators make interesting study, even if there are no great surprises or drama. The two leaders have swapped places with KPN now leading the decline, while Ziggo under Vodafone’s ownership slipped by just 1,300 subs in Q2, its smallest quarterly loss since the merger with UPC at the end of 2014. Furthermore, those losses were almost all in analogue and basic digital services, as the company approaches the end of the shutdown of its analogue cable service. The regions Gelderland and Utrecht switched to all-digital in Q2, while the northern provinces followed in July 2019.

KPN passed a more unwelcome milestone in that Q2 was the first quarter ever that its IPTV service declined, so although the total of 7,000 was hardly catastrophic, it is an ill omen. Although the legacy Digitenne DTT service lost twice as many subscribers to bring KPN’s total decline to 21,000 subs, that at least was in line with a long-established trend.

KPN’s IPTV losses could be attributed partly to closure of its Telfort brand after a long and  modest history ever since its formation over 20 years ago in 1997 as a joint venture between BT and Nederlandse Spoorwegen (Dutch Railways). After various subsequent changes, KPN eventually bought the operation in 2005, subsequently adding the Dutch branch of Tiscali, whose internet services were rebranded as Telfort Internet, which expanded into IPTV. So KPN’s latest IPTV subscriber losses include the very small number of Telfort pay TV customers. However, they also reflect the long-term systemic decline in Dutch legacy pay TV, reflecting the situation in other leading European countries which have imported the malaise from the US. The associated net churn has yet to afflict some of the less mature or saturated European pay TV markets, such as Spain, Poland and Russia, while France was also still growing slightly in 2018.

On the other hand, Germany, Denmark and Switzerland, as well as the Netherlands itself, all registered slight declines. The UK was the biggest loser among the major countries, shedding 424,000 subs in 2018 among traditional cable, satellite and IPTV operators, discounting OTT-only offerings like Now TV, as well as the SVoD players.

As well as by country, there are also significant variations between operators in recent pay TV trends, with Liberty Global feeling the ill winds from across the Atlantic sooner and more intensely than some other major operators such as Comcast’s Sky. Overall, Liberty Global lost 115,400 video subs in the first half of 2019 and 52,900 in Q2 alone across its continued operations that have not been sold to Vodafone or others. This broke down into losses of 24,600 in the UK, 14,600 in Belgium, 19,500 in Switzerland, 2,700 in Ireland and even 1,100 in developing Slovakia where the trend is still upwards. Poland was the only bright spot with subs up 3,800 over Q2.