Among the buzzwords creeping into the video ecosystem, decentralized technology continues to represent arguably one of the most disruptive and least understood – with projects cropping up primarily relating to blockchain-based payment methods, reinvented crypto marketplaces and P2P networking. This week though, the term “decentralized encoding” caught our eye as a start-up called Livepeer raised $8 million in Series A funding.

Livepeer’s premise is similar on the surface to the vast majority of so-called decentralized systems, providing video infrastructure services based on the open source blockchain-based computing platform Ethereum allowing users to earn money while being an owner in the network itself. Yet Livepeer has apparently identified a crucial gap in the market – the encode compute opportunity targeting cryptocurrency miners which have acquired substantial numbers of GPUs to power their mining activities. According to the company’s co-founder Doug Petkanics, speaking to TechCrunch, this GPU-guzzling trend has left a processing void where the genuine video encoding on these chips takes place. The encode opportunity is just one component of Livepeer’s platform-as-a-service for developers wanting to add live or on-demand content to projects.

Launched officially in March 2017, the idea of manipulating excess processing capacity appears to be a particularly nascent area of opportunity identified by Livepeer, although – as is usually the case in technology – the principle emerged a long time ago. In this instance, it was 50 years ago with the invention of virtualization by IBM sharing CPU resources between multiple workloads, admittedly not then decentralized which came some 15 years later with clusters developed by a now forgotten company called Digital Equipment.

As a result, this trend is reportedly driving down encoding prices. Livepeer claims to be up to 10 times cheaper than major providers – with the platform purports to handle two streams for 70 cents a day, while a traditional vendor will charge on average of $3 per stream an hour.

Livepeer claims that as its technology and in-house protocol is continuously developed, nodes running within the network will encode video into the necessary formats to reach every supported device. Users running these nodes will be incentivized via fees paid by the broadcaster in Ethereum, and users can also build up their reputation through the protocol token to earn the right to perform more work in the future – as visualized in the graphic below.

“In the future, nodes in the network will earn crypto-token incentives for contributing their processing power and bandwidth in the service of encoding and distributing video through the network, and for participating in the security protocol, much like miners in Bitcoin and Ethereum earn token for mining. At the moment, there is a high level protocol concept, which will need to be refined, researched, and vetted before being submitted for peer review and implementation,” reads a Livepeer blog post.

Blockchain technologies are almost exclusive to cryptocurrency use cases today but we are seeing a gradual infiltration of the digital entertainment industry. Most recently we reported on blockchain for eSports which has initially been met with skepticism, and we have also seen blockchain-based trials which identify and confirm whether online adverts have been opened and viewed. The expansion of blockchain is restricted however by the nature of networks, as non-cryptocurrency networks offer zero financial reward for sealing blocks, and therefore little motivation to provide compute resources to combat a bad actor.

On the other hand, miners in cryptocurrency networks are rewarded for sealing blocks, so as an attacker attempts to seal more and more blocks, the other miners are motivated to increase their compute resources to continue receiving rewards – presumably to the benefit of a company like Livepeer.

While public blockchains provide a high level of accessibility and openness, they also present the risk of data storage abuse with potentially illegal data. Something like Veriteem – the distributed ledger technology launched by digital security specialist Verimatrix last year – provides control to a self-governed, decentralized group of guardians handling the mining, the defining of applications and also assign “write” access. It is more open than permission-based approaches that limit access to the ledger network and does not require expensive proof of work.

As well as venture capital funding, the Series A round included David Mendels, the former CEO of Brightcove, which TechCrunch a tad over-excitedly described as a “video infrastructure behemoth”. Houseparty founder Ben Rubin was also involved, having just cashed in on the gaming streaming app through a sale to Epic Games just last week.

So, Livepeer plans to put its $8 million funding towards bringing decentralized applications (known in the industry as Dapps) to the mainstream, offering new platform users a generous six months free. The 12-person start-up currently based in New York City has also established a Pilot Partner Program to encourage uptake outside of niche cryto circles – easier said than done.

Edit: Livepeer CTO Eric Tang got in touch to tell us the the main purpose for the funding is to bring the video encoding capacity offered by Livepeer to the mainstream (instead of decentralized applications). While Livepeer can be used by decentralized applications, the main disruption of the network is in the dramatic reliability and affordability it brings to the video infrastructure layer (instead of the application layer). 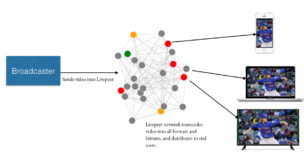