In an energy-conscious society, internet streaming services are increasingly being used as scapegoats for climate change by certain politicians and research outfits. A handful of unexpected protagonists have stepped up to the mark in recent years, in the form of US pay TV operators which have reportedly reduced their carbon footprints substantially through an agreement renewed last year – in turn saving consumers $billions.

AT&T, Altice USA, Comcast, Charter and others have all followed through on commitments initially inked back in 2013 and research published this week rains some rare praise on these unpopular consumer-facing companies. National energy consumption from set tops has declined by 39% over 4 years, even with enhanced functionality of set tops; saving consumers approximately $5.15 billion and avoiding 28.6 million metric tons of CO2 emissions over six years. In 2018 alone, consumers saved more than $1.6 billion and avoided 8.9 million metric tons of CO2 emissions, according to data from D+R International.

It’s ironic then that these operators have been advised to pursue IP delivery as a principal strategy to reduce the overall energy usage in typical homes, as one architecture for reducing the number of operator-supplied devices in the home. We are not saying internet video companies are immune to making environmental commitments, merely highlighting how there are bigger fish to fry first.

To that end, the adoption of pay TV apps on set top energy usage is visible now through a sharp decline in operator hardware orders, with signatories purchasing only 23 million new set tops last year, compared to 46 million new set tops purchased during the first year of the Voluntary Agreement’s commitments in 2014. While some of this reduction is due to subscriber losses and other factors, this week’s results warn the pay TV community that app usage can replace or reduce demand for set tops.

Altice USA only entered the fray in January this year, a belated but important milestone for the agreement as it meant The Voluntary Agreement expanded to an overwhelming 94% of US consumers. The D+R International report says Suddenlink’s systems previously used a different mix of set tops than Altice’s Cablevision system, but in connection with its entry into the Agreement, Altice USA committed to accelerating the deployment in its Suddenlink systems of the more energy-efficient equipment used in its Cablevision system.

So, with legacy service providers and equipment vendors setting a precedent for CO2 saving, what can the internet firms do to play their part? While silicon suppliers strive for lower power consumption, achieving power savings has often been little more than an afterthought for others in the video ecosystem. Data from Lean ICT’s Shift Project shows online video traffic was responsible for 300 million tons of CO2 in 2018. The last mile is therefore crucial, with the report pointing to fiber-optic cables as the most efficient transmission technology, while edge computing developments mean data can be stored closer to end users – reducing the distance data has to travel and therefore reducing energy consumption.

Credit where credit is due then to set top suppliers Arris and Technicolor, along with the NCTA, the Consumer Technology Association (CTA) and of course CableLabs. Outside set tops, Arris has in recent years been investigating using real-time CCAP power management to return 15% energy savings at a cable operator’s head end facility during typical off-peak hours.

Going forwards with an eye to next-generation video delivery, companies are placing particular emphasis on efficiencies in standby power, while preserving a good consumer experience.

This week’s report mentions that cable operators have, since 2013, attempted to develop “deep sleep” modes in which most functionalities were turned off, with a goal of reducing power draw to approximately three watts or less.

Unfortunately, these trials flopped dismally due to the “intolerable” length of time taken for the devices to wake and display video services. When the time required to wake devices from deeper sleep modes is too long, dissatisfied customers seek to disable sleep modes altogether, notes this week’s report. However, associated development efforts led to improved abilities to tailor and reduce power usage for various functions even when the set top is turned on. As a result, the power usage of newer model set tops in all modes has declined significantly since adoption of the initial Voluntary Agreement. The cable operators reportedly had extensive meetings and engagement with key suppliers in 2018 to build upon these developments – expecting to achieve further new efficiencies in the 2020s as a result.

On the network side, Telefónica is a notable recent advocate for climate change commitments, lauding its self-proclaimed “greenest network in the market” which it says has saved 208 GWh over the past three years, equating to 56,500 less tons of CO2 in the atmosphere, in turn equivalent to the carbon captured by over 900,000 trees, it claims. Good guy Telefónica has also committed to recycling all the material from the closures of its copper central offices, promising to do so at the rate of one a day – which could prove embarrassing for operators who continue to neglect copper networks. Of course, we are skeptical of Telefónica’s supposed squeaky clean record, particularly outside its native Spain.

Tier 1 titans like Telefónica must set precedents. The Spanish operator says the migration to fiber has allowed it to consolidate its telecommunications network as one of the most sustainable in the market in terms of energy and CO2. Despite traffic soaring by 107% over the last three years, Telefónica says it has managed to stabilize its energy consumption, with over 50% of its electricity drawn from renewable sources.

The pressure on technology companies over the coming years to transform their businesses into incredibly energy efficient, well-oiled and finely tuned machines will only increase. Addressing this, however difficult, is therefore imperative for everyone in technology, and the infinitely fine margins in our industry could be decided by those operators and vendors who committed to green initiatives early on. 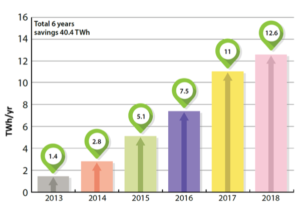