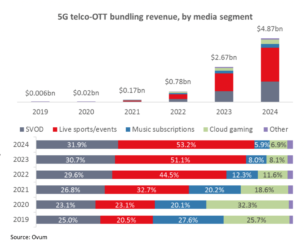 After the SRT report from our research arm Rethink TV sparked much excitement being the first forecast of its kind, another live streaming-focused report has emerged with an interesting take, projecting the telco opportunity in bundling OTT video with 5G – for which live sports will be the chief driver.

Surprisingly, the rise of live sports means the cloud gaming market is forecast to account for a substantially smaller share of the pie by 2024, shrinking from 25.7% to 6.9% over five years. Of course, total revenue growth is still significant, rising from $1.5 million in 2019 to $336 million in 2024. Similarly, music subscription services will be largely drowned out by the rise of live sports and SVoD services, as shown in the graphic below, although still music subscription services will soar from $1.6 million in 2019 to $290 million in 2024 – but specifically for the 5G telco-OTT opportunity.

Ovum’s 5G Media Bundling Opportunities report supports these figures on the premise that live sports streaming services will enjoy superior quality video over 5G and increased reliability, while the premium nature of sports rights makes it a perfect fit for hard and soft bundling.

One caveat however is that the dedicated bandwidth and network slicing required by live sports streaming will not be “immediately on tap” amid 5G network rollouts.

A whole host of upcoming OTT video service launches look destined to be bundled with 5G network roll outs, namely WarnerMedia’s HBO Max (Spring 2020) with reports claiming AT&T will offer a discounted bundle with a wireless package. Verizon we know has inked a deal with Google to bundle a YouTube TV subscription into 5G wireless home and Fios internet, telephony and TV packages. Details are scarce, other than offering “unique, high-value promotions to customers across platforms,” so we’ll have to wait until later this year before Verizon reveals critical nuggets like pricing and launch date.

We also covered the recent launch of WarnerMedia’s Innovation Lab, highlighting how the project looks as much about carving out a killer 5G content marketing campaign as being designed to develop the required technologies – where data and findings will flow from seven initial lab locations to WarnerMedia string-pullers.

While over in the UK, BT is betting big on 5G infrastructure investments, not least with the aim of sustaining a competitive presence in the premium sports market.

It isn’t clear from the preview summary whether the data covers esports, itself forecast to boom impressively over the next few years, but we suspect this comes under the bracket of cloud gaming within the report.

“Business-development execs at carriers have over the past two years or so been asking where the next “killer apps” in telco-OTT bundling partnerships will come from, beyond the current staple of premium video and music streaming services such as Netflix and Spotify. That question has gained more urgency with the advent of 5G,” said Guillermo Escofet, principal analyst of media and entertainment at Ovum. “Partnership options in the live-sports streaming space are multiplying, as more OTTs join the fray, including the FAANG giants, and more rights holders go direct to consumer.”

“For carriers with no broadcasting ambitions or not able to secure broadcasting rights, bundling deals with live-sports-streaming OTTs will be the next best thing. And many of the roles that 5G carriers see themselves playing around live sports, such as team/event sponsor, team owner, or event organizer, will be complementary to such partnerships, added Escofet.