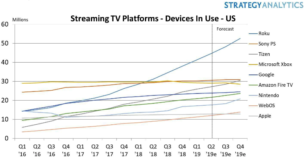 Roku blew away its numbers in style as the US streaming company surpassed 30 million active users in Q2 2019 – comprehensively extending its native dominance in the connected TV space. But while Roku’s second quarter results are a milestone for the company, they also signify significant tailwinds in a broader field – advertising.

Revenue growth of 59% year on year to $250.1 million was primarily driven by growth in advertising as Roku managed to more than double the number of monetized video ad impressions. Roku celebrated machine learning becoming the engine behind the most content recommendations in The Roku Channel for the first time in the second quarter, claiming that predictive models are increasingly driving movies and shows in The Roku Channel, its free ad-supported channel, which is available to stream without Roku hardware.

With 9.4 billion streaming hours under its belt in the second quarter, a 72% annual increase, it’s no wonder Roku is waxing lyrical about its data clout. As well as Roku’s mysterious machine learning algorithms, the company said deterministic data is helping advertisers reach more consumers at a more accurate level. To this end, it claims registration data is 21% more accurate than basic IP addresses, which is often the preferred targeting method for ad tech firms. This registration data is driving use of Roku proprietary targeting segments in ad campaigns, more so than any other tactic, Roku claims.

The data is overwhelming, claiming that Roku-only users are twice as likely to consider ads on Roku more relevant and personalized than users of Amazon Fire and Apple TV devices, according to figures from Dynata.

Three distinct ingredients were praised for forming the foundations of Roku’s successful digital ad platform – a coveted audience, reach at scale, and proprietary data to drive results for marketers. Combined, these have created a data-rich approach helping Roku establish a significant gap between itself and rivals, streaming 69% more ad-supported hours than the next nearest streaming platform in June 2019, according to Comscore.

It comes after Roku recently, towards the end of May, launched an analytics tool called Activation Insights, a piece of software for tracking a brand’s linear TV campaign performance and flagging the potential missed OTT audience opportunity. Part of the Roku Ad Insights suite, Roku says the software helps marketers analyze AVoD campaigns and it can also provide the optimal budget to spend on the Roku platform.

A year ago, Roku was just beginning to edge away from the pack, passing Sony PlayStation and Microsoft Xbox in Q2 2018 as Roku cruised past 30 million device shipments in the US and onto approximately 41 million active OTT devices and smart TV sets in the field as of last month, according to research from Strategy Analytics. As shown by the graph below, cited by Roku in its Q2 filing, the data shows Roku is forecast to reach around 52 million units by Q3 2019 – placing it more than 20 million devices ahead of its nearest competitor Sony.

Roku’s business is separated into two arms, Platform and Player, with differing levels of profitability, as this week’s results show. Platform gross profit benefited from a 74% spike to $109.7 million for Q2, while Player profit suffered a 69% decline to $4.5 million. Combined, total gross profit increased faster than revenue at a 47% year on year climb to $114 million.

On course to record over $1 billion in revenue this year, Roku is no small beer anymore – and its data wallop is only just beginning. Could we expect a hardware-less Roku in the near future, as the company continues to strengthen its position in smart TV OS licensing? Dongles are dominant today but Roku now represents over 1 in 3 smart TVs sold in the US during the first half of this year.