SVoD projections are fun, even if they are unlikely to work out 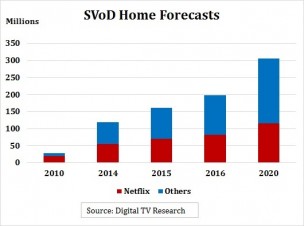 There is a rule of thumb that we would all do well to remember – it is two sided and goes like this “When things appear to be going badly, they are worse than they at first appear, because someone is covering up the worst news,” and its corollary, “When someone appears to be winning in a new market, chances are, as the market grows, they get better and win by more.”

It is the latter that this week we might apply to Netflix as a report has come out suggesting that it will reaching 115 million homes by 2020, and the former is perhaps which dictates our earlier story about AT&T.

The report that praises Netflix comes from Digital TV Research, which suggests that SVoD (subscription Video on Demand) will reach 306 million homes by 2020, with not quite half of them buying Netflix.

It is, of course simplistic. There is every chance for Netflix to fumble the ball and back all the wrong original content choices, and for this to come back to haunt it. There is even a report out this week that says Netflix is not winning that war at all. That report comes from Parrot Analytics which says that it uses a combination of AI, Big data and social media feeds, to determine which movies and TV series are preferred.

It concludes that HBO holds all the cards (except for the House of Cards) because of its Game of Thrones series, and that this rates as 28.3 million “demand expressions,” almost double the 14.2 million for Netflix’s top show Narcos.

The top five in the US also include Orange is the New Black (Netflix, 8 million), True Detective (HBO, 7.8 million) and Silicon Valley (HBO, 6.3 million). Amazon’s highest-placed original series, Hand of God, ranked eleventh and took just under 2 million. The report’s headline was that Amazon is lagging, which is fairly clear, but you could have made the same predictions by working out how much was spent on each series, because we’re fairly sure it would place the series in the same order.

Back to the Digital TV Research report and SVoD has gone from 28 million in 2010 to 161 million in 2015 and should rise to 306 million across 200 countries by 2020. The total grew by 42 million in 2015 alone. We think it would make more sense to measure either viewing hours or bits delivered, rather than viewing homes perhaps.

China will increase by 20 million subs between now and 2020, with the US bringing in an extra 22 million, Japan 9 million and India more than 7 million. We love these reports. Right now that’s a drop in the ocean for China, but more than half of the fixed broadband lines in India, so we’re not sure how its numbers work.

It MAY happen, but as Mobile First TV emerges, some of it paid for by advertising, especially any that can be delivered over LTE Broadband, the services which start in cellular dominated societies like India will dominate. Also TV Everywhere, so far given a bad press, has had a rebirth in the US, and it may well rip through the entire global community by 2020. Linear projections are rarely likely to turn out right, however, it’s nice to see what will  happen even if progress is linear. It gives us an order of magnitude, but SVoD cannot be seen outside of the context of catch up broadcast and TV Everywhere and also electronic sell through, which may make a comeback, if the right technologies emerges.