Faultline was hit with a pang of curiosity this week about the extent of 4K, HDR, and smart TV features in the most popular TV models available in the US. Of course, such data is not charted publicly, but taking a snapshot of three retailers provides a pretty informative view of the market, as it emerges from lockdown and prepares for holiday promotions.

We charted the 15 most popular models across these stores. Walmart and Best Buy allow you to filter search results by best selling, but Amazon lacks that capability, so we used ‘featured,’ as this is the most typical view that consumers will see, when browsing for TVs on the website.

Of the 45 units, 10 brands were represented, with an average selling price of $432, and an average screen size of 45 inches. Notably, Amazon skewed the results pretty heavily, after featuring an $1,800 unit from LG, and a $998 dollar Samsung. Without those, the average falls to $385. 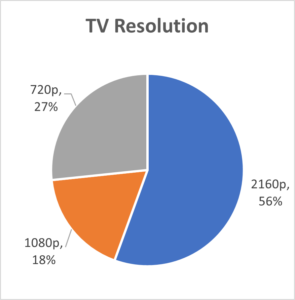 The next notable feature is HDR, and it was not surprising to see that this feature was only really found on TVs that were over $350. This means that the average selling prices mentioned above are not enough to afford HDR. However, in terms of the number of units, 53% of the TVs were HDR capable – such is the impact of the very cheapest TVs, in bringing the average price down. The cheapest unit was an $80 Insignia from Best Buy. 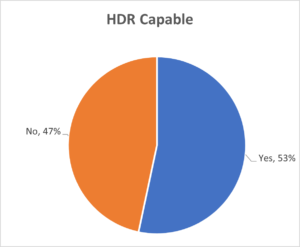 The amount of HDR units available is promising. Even more encouraging was the 89% of these TVs that were categorized as ‘Smart’. You would assume that the cheapest units would forgo smarts, but a notable exception was a $368, 55-inch, 4K and HDR capable unit from Sceptre, available in Walmart. Some consumers want to bring-their-own smarts to their TVs, and this Sceptre suggests there is a market for premium features in dumb TVs. As for the breakdown between smart TV operating systems, Roku held the greatest share in the US. That’s not surprising, but is demonstrative of the position the platform holds in the US. It has already bumped Samsung into second place, based on this snapshot, but Android is not far behind in third. Notably, there’s still one entry for Chromecast, in a very cheap Vizio unit that only has a casting function, and not really a standalone OS. 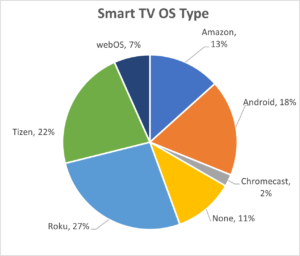 There are some observable allegiances between brands and operating systems. Samsung and LG obviously favor Tizen and webOS, respectively, while Best Buy’s Insignia brand and Toshiba have opted for Amazon’s Fire TV. Walmart’s Onn brand has chosen Roku. While four of the five TCL units use Roku, one is Android. Hisense has two Android units and four Roku, while Sony is an Android exclusive – although brands it as Google TV in the marketing materials. Vizio’s aforementioned Chromecast unit is joined by another Android unit, while one of the four Sceptre units opts for Android – with the other three not being smart at all. The final category we charted in the snapshot was panel size. Breaking it into 10-inch segments, bookended by a 20-and-under and a 70-and-over, the overwhelming majority of TVs were found in the 40-49-inch and 50-59-inch segments.

With those two segments representing a nearly even split of 56% of the total, the only other segment to score double-digits was 30-39-inches – with 20% of the market. It is not surprising to see that the largest score lowest, however, those measuring over 60-inches still account for 14% of the units in this snapshot. 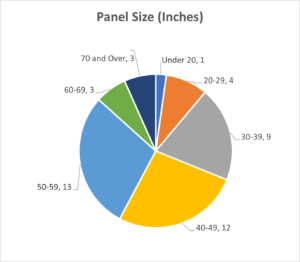 Further work could build on the room sizes that these units are being purchased for. An old rule of thumb was to measure the distance you were going to view the television from, in inches, and divide that by two to get the diagonal size of the required TV panel. So, a 120-inch TV is best viewed from 10 feet away, while a six-foot TV is best suited to a 36-inch TV.

For our average panel size, of 45-inches, this suggests a 7.5-foot viewing distance. Mapping that to average room sizes or viewing distances would suggest if there was a physical cap that our ever-growing TVs are going to eventually clash with.

Consumers, however, seem pretty susceptible to marketing. It seems probable that TVs that are too large for a room are still going to be bought at significant scale, even if they disagree with the old adage. We probably all know that one neighbor with a TV large enough to act as floodlighting for their garden or driveway.

Of course, larger TVs require larger resolutions, otherwise visible pixels are going to spoil the image quality. There are some oddities in our list. There are two 32-inch 720p models from TCL, one from Walmart’s Onn, one from Hisense, and two from Best Buy’s Insignia.

However, the worst offender is a 39-inch model from Insignia, which retails for $220. On paper, this should not look great, but it has an average 4.6-star rating, based on 1,990 reviews on Best Buy. Notably, the poor reviews almost never mention poor image quality, with most complaints centered on the broken or complete lack of casting, EPG and UI problems, and dropped WiFi connections. Given that Best Buy has sold it for as little as $99 in sales, it is not surprising that such problems seem alarmingly common.

For some final context, Rethink TV – Faultline’s research wing – estimates that there are around 232 million televisions sold globally each year, with around 174 million of those being smart. Given the longevity of TVs, most are simply relegated to less important rooms in the house – meaning it can take a long time until flagship technologies are common across all the units in a home.

However, as average selling prices fall, and software becomes more important, there is a fear that the average lifespan of TVs will be dragged down by the arrival of smart TVs – where failures in the processors or software stacks turn an otherwise functioning panel and speakers into a piece of unusable e-waste. Cumulative software updates can quickly degrade the user experience, and while that might not be such a problem for the cheapest units, that would leave a very sour taste in the mouth, in a four-figure purchase.