Two weeks ago, we tore into the conclusions of Digital TV Research, which tried to dress up an improvement in pay TV losses in Q4 as good news. This coincided with some preparatory groundwork in our Rethink TV forecasting service, and based on the numbers found, it looks like the decline is going to be significantly worse than Digital TV Research thinks.

The article in question believes that North American pay TV will decline by 16 million over the next six years, with 4.2 million in 2021. Based on Rethink TV’s digging, the USA alone could shed 6 million in 2021. The US pay TV market lost around 5.9 million subscribers in 2019, and then around 6.1 million in 2020. Since 2015, it has lost 17.6 million – sitting at just over 75.3 million. If that decline continued apace to the same 2026 end-point as Digital TV Research, US pay TV losses would be over double what they project – at around 35 million.

For broadband, in that same 2015 to 2020 period, the operators have grown from 78.7 million lines to just under 88.5 million – an increase of some 9.7 million. To this end, the number of broadband customers surpassed the number of pay TV customers in 2019, although there is a good chance this happened earlier, as the USA has around 7,000 ISPs, whose numbers are not counted here.

Notably, some operators flipped earlier, with Comcast doing so in 2014. By our reckoning, Charter has had more broadband customers than pay TV since 2010, at least, but as an industry, the pay TV crowd now has more broadband subs than video. 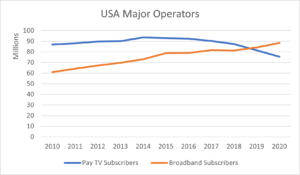 There is absolutely no reason to think that 2021 won’t also post a substantial loss of pay TV customers. If the rate of decline seen in 2019 and 2020 continues unabated, which is of course nearly impossible, then 2033 would be the year that the final pay TV customer cancelled their package.

The question you need to ask is what evidence is there that pay TV can slow the 6 million annual subscriber loss on its own? There will come a point where the losses appear to slow, and we have no doubt that some in the industry will herald this as a success, but the reality is that they will be running up against an aging customer base that simply doesn’t want to cut the cord.

There will be a point where this decline bottoms out. Older customers are, after all, resistant to change, and would hold onto their set tops for as long as possible. However, there is also a point where the cost of maintaining these pay TV distribution networks becomes untenable for the operators.

For cable, the broadband delivery is done over the same physical infrastructure, so this is not such a concern. Satellite operators have some reprieve, because their pay TV customers are less able to cancel and move to an OTT service if there is not sufficient broadband coverage in their area.

Broadly, if you are stuck with satellite TV because cable is not available in your neighborhood, there is a decent chance that you also don’t have a great selection of broadband choices. This is changing, over time, with the arrival of LEO satellite services for rural areas, as well as the expected advance of cellular as a fixed-wireless option for these communities.

As it stands, this should mean that satellite TV is stickier for a subset of customers that do not live in competitive markets. However, Dish has still declined from 14.1 million subs in 2010 to 11.3 million in 2020 – with most of that fall kicking in from 2015’s 13.9 million.

Because of AT&T’s acquisition of DirecTV in 2015, getting the total satellite count requires some guesswork, but it looks like the count has fallen from 33.3 million in 2010 to around 22.5 million in 2020. More research will be carried out here, but this paints a pretty bleak picture, even if it transpires that the DirecTV losses are not as steep as AT&T’s IP-based services. 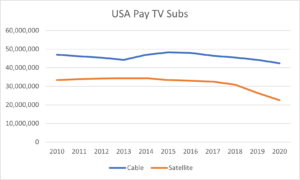 Comparatively, the count of cable pay TV subs has only declined from 47 million in 2010 to 42.5 million in 2020. This seems counterintuitive, as you would expect sharper declines here – as if you have cable TV, you almost certainly have cable broadband, meaning you are a prime cord-cutting candidate.

The answer here seems to be the bundling, where there is often no financial incentive to completely ditch a video service from your cable provider. Sure, you can cut your monthly bill by dropping from the premium packages to just the basic cable TV option, but due to triple-play pricing, you will be paying just as much for the broadband as you would the broadband and TV – making cable TV a ‘may as well have,’ rather than a ‘nice to have.’

Now, time for some napkin math and speculation. Rethink TV was most interested in counting the number of broadband customers served by the operators, to estimate when the pay TV distribution networks would wholeheartedly be abandoned in favor of OTT delivery.

In 2020, this has grown to 81.2%, with total broadband households estimated at 108.9 million and our operator broadband figures standing at 88.5 million. Between 2018 and 2020, the major operators we are tracking added 7.1 million broadband homes. 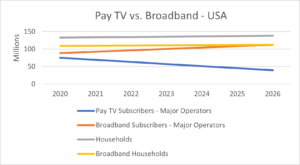 These estimates are very provisional, and are essentially just continuing the recent growth curves forward. If the addition of broadband homes continued at this pace, in 2033, broadband penetration in the US would stand at 97.6%. This seems too high, and suggests that there will be a slow-down at some point, but it remains clear that the gap between pay TV subscribers and broadband subscribers is only going to widen.

Giants tussle with OTT sport – Amazon in, Facebook out?
Vodafone reassures ISPs that QED standard is friend not foe