Utility broadband was a very hot topic a few years ago, fraught with threats of lawsuits, local political turmoil, and consumers that were tired of being underserved by the largest ISPs. While expanding into broadband – the most modern utility – was perceived as a golden opportunity, progress appears to have been slow.

EPB in Chattanooga was something of a posterchild for the trend, and was met with legal challenges by Comcast and AT&T in 2014, after the municipal utility sought approval for a FTTH network. The pair claimed that there was no demand for the EPB service, but a study in 2015, from the University of Tennessee, said that Chattanooga’s Gig City initiative, fueled by the EPB network, has created somewhere between 2,800 and 5,200 jobs, and provided a billion dollars of economic benefit.

It might be coincidence, but the unemployment rate fell from a high of 10% to just under 5%, at the time of that study too, and the current consensus is that the initiative stopped the city’s decline in its tracks, following the death of its industrial and manufacturing heritage. Now, technology businesses, enabled by the project, are the future of Chattanooga.

However, a purely commercial project has a cautionary tale in Google Fiber, by contrast. Its infamous collapse infers that a standalone fiber-focused ISP is doomed to fail, whereas utility operations can safely subsidize such fiber expansions. There have also been a few of prominent failures, from municipal broadband projects, chiefly iProvo and the Ashland Fiber Network (AFN), which detractors like to point to, as they argue against cities considering such projects.

But utilities around the world have proven that they can run viable ISP businesses in parallel with their core operations. ESB in Ireland has pursued a wholesale B2B broadband strategy, under the SIRO brand. Enel in Italy has done the same, with Open Fiber, as has Northpower in New Zealand. Both Norway and Denmark have utility partnerships that target retail customers, under the Altibox and WAOO, and M-Net and IWB Net in Germany and Switzerland are targeting both retail and wholesale.

Unfortunately, Chattanooga still seems to be the exception that proves the rule. While more utilities are entering the ISP game, the Chattanooga example has not set hearts racing. There are signs of interest, but the victory that Chattanooga won against the incumbent ISPs has not been replicated across the rest of the USA – at least on the surface.

But dig a little deeper, and you can see that there is a strong current at play, which seems to be building into something of a wave. CPE and backend services provider Calix signed a deal with utility cooperative consortium Conexon, in October 2020. A key data point there was that some 200 of Conexon’s 800 members were already providing broadband services to members.

So then, what sort of scale is available to the likes of Conexon? What this graph below shows is the growth of total households in North America, from around 146 million to 154 million. Nearly every household is an electricity customer, and even those that have gone off-grid still can’t do without broadband – such is the value of an internet connection, these days.

You can see the crossover point in 2019, where broadband households pass pay TV households. However, it will take another decade until every household has broadband, and by that point, the importance of fixed-line connections may have lessened. 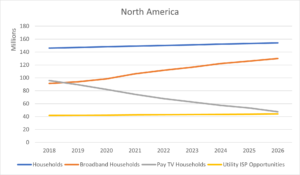 The bottom line on the graph represents what we are calling Utility ISP Opportunities. This is essentially the number of customer homes within the publicly owned and cooperative electricity utility footprint, which have been chosen because those utilities are most likely to embrace an ISP venture. This grows from around 41.7 million in 2018 to 47.4 million in 2026, as the North American population grows.

The FCC estimates that around 19 million US homes are without broadband currently, of which 14 million are in rural areas. This is using the 25/3 Mbps measure, which has been criticized for not being suitable for modern demands. If a 100/10 Mbps definition was put in place, that 19 million would swell.

For those in rural markets, the largest ISPs have shown their lack of enthusiasm to build out their networks to cover them. Broadband is a bipartisan issue, and there is more support than ever for local government initiatives to provide broadband to citizens. As so many utilities in the US are owned by these governments, getting a mandate in place to build a fiber network is not impossible.

While utilities tend to be quite capital-efficient, usually more than telcos, constructing a network from the ground up is still a significant undertaking. However, utilities are not starting from scratch. The growth of renewable energy generation has necessitated that their distribution grids are capable of two-way flow, and most are well on their way to installing connected meters in every customer location, and coordinating grid-scale assets using fiber and sometimes Private LTE networks.

Notably, gas and water utilities are also possible channels for broadband growth, but their networks do not require the same dynamic control that electricity utilities do, so have less investments into smart grid technologies. However, their distribution networks are still excellent candidates for running fiber in, and tapping into those runs is viable.