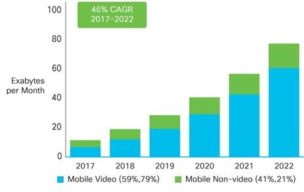 Faultline Online Reporter will once again be on a mission at Mobile World Congress in Barcelona next week filtering the buzzwords from the real business opportunities and trends. It’s only fitting then in the meantime we should take a look at another Mobile Visual Networking Index (MVNI) from our old friend Cisco – projecting an exorbitant increase in data traffic to whet the appetite of MWC attendees.

Mobile video will grow at a CAGR of 55% between 2017 and 2022, higher even than the overall average mobile traffic CAGR of 46%, according to the MVNI. Of the 77 exabytes a month traveling over mobile networks by 2022, nearly 61 exabytes will be due to video. The graph below provides a nice visual of the sheer scale of mobile video’s share of total traffic.

However, such demand does not come without its consequences. The growth of video in both fixed and mobile contexts leads to the inevitable issue of traffic congestion in peak hours. And it is this very reason a publication like Faultline Online Reporter travels to a show like MWC, to assess the developments being made in mobile networks and how operators plan to cope with the projected surge in traffic, the lion’s share of which is video. We already know the answer, of course, as we prepare for the jet stream of 5G press releases.

That said, one of our takeaways from last year’s MWC was a distinct lack of demos for what is probably regraded as the most bandwidth heavy of all applications, VR and AR, compared to previous years. It will therefore be interesting to see if 2019 – being the year of 5G roll outs – will reignite the Mixed Reality flames. That said, Cisco’s MVNI VR and AR as “the next set of the biggest trends in mobile technology” and proceeds to convince us why.

Cisco reckons the evolution of edge computing and advancements in wireless networking ranging from the imminent roll out of 5G to highly efficient mobile connectivity solutions, coupled with access to smarter mobile and wearable devices, have all contributed to providing a rich environment for the proliferation and growth of AR and VR. Let’s not get ahead of ourselves here; MR is certainly poised for major disruption and we expect Cisco has factored in a huge uptake in VR services into its mobile traffic forecast, however, we are a good few years away yet from going mainstream.

The accelerated acquisition of smartphones, tablets and wearable devices is significantly contributing to the development of AR and VR markets, says the report. Globally, smartphones will account for 54.7% of device connections by 2022 (at a CAGR of 9%), and 93% of total traffic (growing at a CAGR of 48%). Cisco expects AR and VR market development to follow a similar trend.

VR hinges hugely on adoption in the gaming community, yet Cisco has also factored in use cases including retail, medicine, education, tourism, and retail. Cisco’s numbers have AR growing at a slower rate currently than VR, but with its multiple applications in different industries it stands a chance to become more popular than VR. We are on board with this assessment.

AR and VR traffic will grow nearly 12-fold from 22 petabytes a month in 2017, to 254 petabytes a month in 2022, according to the MVNI, warning that service providers must “take note” of this increase in demand leading to bandwidth and latency requirements becoming increasingly imperative for a high quality VR and AR experience. We would argue the industry is well beyond the “take note” stage and most are well on their way to making necessary adaptations such as major network upgrades, in order to accommodate future services.

Meanwhile, Cisco found that mobile offload exceeded cellular traffic by some margin in 2017, with 54% of total mobile data traffic offloaded onto the fixed network through WiFi or femtocell in 2017. In total, 13.4 exabytes of mobile data traffic was offloaded onto the fixed network each month, driven by 650 million mobile devices and connections being added in 2017 – growing global mobile devices and connections in 2017 to 8.6 billion, up from 7.9 billion in 2016.