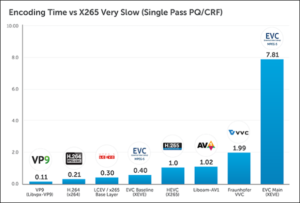 Wowza has published its Video Codec Landscape 2022 guide, which sets out the lay of the land in the encoding world. The major takeaway appears to be AV1 reaching cost parity with HEVC, and some pretty concrete evidence for the improvements that the LCEVC enhancement layer can bring to the table.

The esteemed Jan Ozer is the report’s author – a person who plays around with the guts of these codecs and provides a valuable outside perspective on the actual real-world performance of these tools. To this end, we should be able to happily trust the findings, and the Wowza endorsement reinforces this position.

The report kicks off by comparing relative codec efficiency, using HEVC (H.265) as the baseline. EVC’s baseline (MPEG-5 Part 1) is 6% less efficient, reflecting its immaturity, with AVC (H.264) some 51% less efficient than HEVC – exactly as one would expect.

However, when you add LCEVC (MPEG-5 Part 2) to that same HEVC benchmark, the test recorded a 22 percentage-point improvement – scoring 78% compared to standard HEVC’s 100%. AV1 manages to reach 62%, and in a thoroughly messy conclusion, VVC scores 57% and EVC’s Main Profile scores 58%.

For AV1, this proves that it is a marked improvement over HEVC, while being cheaper on a royalty basis too, and having the widespread browser support that has stymied HEVC growth. For LCEVC, the lift demonstrates the value for its services-focused sales strategy, and shows that any video service should evaluate the bandwidth improvements that LCEVC brings to their existing workflows.

However, the more wrinkly conclusion is how close VVC finishes to AV1. There are a couple of ways to read this. On paper, VVC has had many more years of development than AV1, and so we would have expected it to be more than four percentage points ahead. Of course, AV1 has had many more years of real-world experience, which will have let the industry improve on the original implementations.

But perhaps worse for VVC is just how close EVC’s Main Profile has finished. Faultline’s sister service, Rethink TV, has described EVC as something of a nuclear option, which the codec world could turn to if the VVC rollout gets bogged down in the same manner as HEVC. Due to its free Baseline tier, workflows could move to replace HEVC entirely, and rely on the Main Profile for a VVC equivalent – paying royalties to the three IP holders involved.

But the very next graph in the report shows why the industry is likely going to be stuck with VVC. Here, the report compares the encoding time needed, again using HEVC as the baseline. In this comparison, EVC’s Main Profile takes 7.81 seconds to encode, for every second needed in the HEVC baseline.

Compared to VVC’s 1.99 seconds, it shows how much progress needs to be made on the encoder side of EVC development before it could be stood up as a legitimate alternative to VVC. Ozer notes that the EVC Main Profile software had only been available for a few weeks, at the time of testing.

This same test also shows that AV1 takes just 0.2 seconds longer than HEVC, which is rather good news for live video workflows.

Sure, 200ms is a very big deal in the Ultra-Low Latency world of WebRTC, but compared to the minute of latency that is currently acceptable in OTT live streaming, 200ms is negligible – and would allow the video service to enjoy those AV1 bandwidth savings. Based on these tests, the tradeoff is a 200ms increase in latency for a 38% bandwidth saving.

But again, EVC stands out, scoring 0.4 seconds for its Baseline version compared to the HEVC baseline’s 1.0 second, with LCEVC bringing the time down to just 0.3 seconds.

Compare this to the AVC result of 0.21 seconds, which has had nearly 20 years of development to improve its hardware and software optimization, and the most chest-beating enthusiasts would be able to make great claims and future promises.

Of course, VP9 scoring a very impressive 0.11 seconds is going to garner very little interest, outside of Google’s ecosystem.

That it is the best performing codec in speed should mean that anyone in the Low Latency HLS and Low Latency DASH game should be taking a look at it, as it wipes the floor with HEVC. Of course, in that particular argument, it is only around a tenth of a second quicker than AVC, and it is a sorry state of affairs that AVC is still the vast majority of video streams, despite being released in 2003.

Lab results are one thing, but the report examines the silicon and device maturity of the codecs. Here is where the graphs make the most emphatic evaluation of EVC, which is still not yet found in live encoding and transcoding products.

Comparatively, AV1 and VVC are in their second year of chips, while AVC, HEVC, and LCEVC are in the 5+ year range.

For mobile devices, EVC is still at the Year 0 stage, while according to Wowza, VVC is now appearing in chips – although both VVC and AV1 play well in software configurations, and so do not necessarily need dedicated hardware, notes the report.

When looking at smart TVs, EVC is in the same boat. However, VVC has begun appearing in its first products, putting it just a year behind AV1, when measured in this manner.

To round out on the device support, it seems that AV1 and VVC are neck-and-neck in the production side of things. In mobile, AV1 has a two-year lead, but in smart TVs, only one. EVC, in all three, is stuck at the start point. EVC’s encoding performance would likely improve with more hardware support, but this puts it in a catch-22 situation.

Of course, the LCEVC gang jumped on Ozer’s Twitter post to postulate that the evaluation was “slightly unfair.” Ozer shot back with a direct quote from the report flattering LCEVC, asking “What are you looking for?” before Ozer settled for a beer from CEO Guido Meardi. Faultline shall keep a close eye on the bar, at Streaming Media East next week, to see the concession paid.