First impressions would lead you to believe that ThinkAnalytics’ new Personalized Images product is a direct retaliation to an almost identical move from Gracenote, which launched its Personalized Imagery update just a few weeks earlier. But first impressions aren’t everything – unless, of course, you are fussy modern consumer browsing a VoD carousel, in which case they absolutely are everything.

The true significance and value therefore stems from how ThinkAnalytics has identified a gap in the offerings of early personalized image systems such as Gracenote’s, where it can nestle in and apply its years of recommendations algorithm expertise to – for want of better wording – make personalized images more personalized.

But this is more than just a gap in the market. ThinkAnalytics has been the brains behind Gracenote’s Personalized Imagery feature since before it was launched, putting a lot of its intellectual property and experience into getting Gracenote’s Personalized Imagery product to launch, which explains why the ThinkAnalytics team decided on twinned branding for its standalone service.

The UK software expert describes Personalized Images as a booster for engagement and monetization – achieved by applying advanced AI techniques and information science to automate the process of personalizing images in content catalogs and UI carousels. The technology can take in metadata from a range of sources, with Gracenote being one of the initial partners.

Clearing the air, ThinkAnalytics CTO Peter Docherty told Faultline that the company fully realizes that not all customers have standardized on Gracenote metadata, which is why the technology has the ability to work with all metadata and image providers. He explained that these techniques categorize a customer’s existing catalog and source of images, before its proprietary personalization algorithms within the content discovery engine select and present the best image to the viewer.

Having spoken with both parties, this is interesting. Gracenote told Faultline, at the time of launch just three weeks ago, that it has a dedicated sourcing team working directly with studios to obtain program images for use in Personalized Imagery, part of the company’s Advanced Discovery Suite, to present the best images to individual viewers as they make tune-in decisions. The more we think about it, the more this so-called dedicated sourcing team sounds like it is actually ThinkAnalytics, considering the UK vendor was not credited in the original press release, nor in our post-announcement dialog with Gracenote.

That said, Gracenote’s announcement went into a lot more detail than ThinkAnalytics did this week, including mentioning how Personalized Imagery captures and monitors personal tastes including mood, theme, scenario, or cast information, on which the image results are based. We suspect ThinkAnalytics saw no reason in regurgitating what Gracenote had already published, so kept its own announcement light. Docherty noted that ThinkAnalytics’ metrics don’t stop at these four, processing a multitude more including subject and setting.

We understand that, in a deployment scenario, ThinkAnalytics handles the recommendation of poster images, while Gracenote supplies the metadata to fuel the image sourcing part of the process, leaving ThinkAnalytics to concentrate on what it does best, which is personalization.

We appreciate this is peak oversimplification, so let’s remind ourselves of a personalized image example provided by Gracenote of “female bonding” as the core theme of a TV series. While not a genre in its own right, Gracenote suggests that highlighting the female bonding aspect as imagery would increase appeal to a whole new audience. On an individual level, the female bonding theme might not interest one particular viewer, but showing an image of their favorite supporting actor appearing in the show would likely sway their decision.

But, as with Gracenote, the same question remains for ThinkAnalytics – what happens if, for example, the image source (such as movie studio) has not provided an image of a certain supporting actor in a specific title that the algorithms show would serve as a highly effective personalized image? Does ThinkAnalytics’ Personalized Images rush to IMDb where it can pull images of said actor, or does this revert to a Plan B? We cannot blame Docherty for dodging this nitpicky question, although we half knew the answer already, as Gracenote told us that no image recognition technology is used. In other words, you get what you are given.

An evolution of the technology could therefore be to analyze individual titles using AI-based image recognition, to extract personalized images based on favorite actors or scenes, to replace poster images. Complicated rights issues could put a stop to that, but this is food for thought nonetheless.

Taking in the bigger picture, ThinkAnalytics and Gracenote are addressing a growing demand for tailored aesthetics in the UX, one that we see as so significant that we compared it to the revolution in addressable advertising. To this end, the fact that separate households viewing the same content at the same time can receive completely different targeted ads is frankly a grossly understated achievement. Something like ThinkAnalytics’ Personalized Images takes that concept into the UX, where a pay TV operator’s launcher page or OTT carousel will show different poster images for the exact same titles, as visualized below. Being able to show still images that evoke emotions from the end user based on past preferences is a trend that we see having a massive impact on viewer conversion rates. 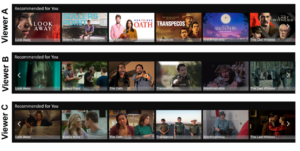 To that end, early field results have shown 10% to 15% uplifts in viewership when using Personalized Images when compared to displaying a single standard image, which we have confirmed concerns full plays. These early use cases are OTT but similar results apply to pay TV, Docherty informed us.

While these are early days in the personalized image journey, we cannot help but think grandiose thoughts on behalf of vendors which struggle to receive the credit they deserve for industry innovations. ThinkAnalytics is happy positioning itself as a partner to Gracenote for now, with the technologies clearly complementary rather than competitive in nature, but there is room to disrupt that utopia in the long-term. ThinkAnalytics has come a long way from its recommendations roots, growing into company with deep knowledge of the metadata landscape and what it takes to challenge a TV metadata incumbent like Gracenote, even if it is owned by a lumbering giant in Nielsen.

Wanting to clarifying its independence, Gracenote said in an emailed statement to Faultline, “Think is a good partner – the products are different and like all good partners Think has integrated our solution but equally has its own version for non-Gracenote customers that is derived in a different way. Ours is based on our video descriptors and the images tagged with that taxonomy which is a wholly Gracenote-built data set.”

Gracenote’s metadata rivals must therefore be in ThinkAnalytics’ crosshairs to license its Personalized Images IP, and you can bet that every personalized image feature that is launched from now on will have ThinkAnalytics’ influence all over it.