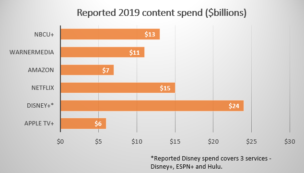 Reflective of virtually every business decision and attempted disruptive move ever made by Apple in the video space, underwhelming reports emerged this week claiming to have inside knowledge about the forthcoming Apple TV+ streaming service – with rumors pricing it at a monthly fee of $9.99. If accurate, the price point reeks of a strategy gutless to undercut the same established OTT video firms the company is supposed to be competing with, 10 years since the late Steve Jobs plotted to reinvent the television.

Our criticism may be short-lived, however, as Apple appears to have redeemed itself with a colossal content budget rethink – blowing its original $1 billion spend spectacularly out of the water with an additional $5 billion. This is most uncharacteristic of Apple, a company famed for its mountains of cash yet infamous for its reluctance to spend much on anything other than tweaking iPhones and MacBooks.

Reports, first published by the Financial Times, suggest Apple has earmarked this entire $6 billion for original content spend only, so not including any third-party content licensing deals. Another report from Bloomberg, meanwhile, says the first two seasons of new title The Morning Show is costing Apple around $300 million, making it one of the – if not THE – most expensive TV series ever made on a per-title basis. Meanwhile, WarnerMedia’s HBO Max is reported to be looking at a 2019 content spend in the region of $11 billion and Comcast’s NBCU+ has supposedly set aside $13 billion, as visualized in the bar chart below.

But Apple is in an unusual position. Cook and Co. aren’t used to being among the smaller fish in the pond and even a budget of $6 billion pales in comparison to Netflix’s $15 billion annual original spend, $3 billion more than last year, and Disney’s monolithic $24 billion content pledge (including Disney+, ESPN+ and Hulu). In Apple’s defense (rare, we know), when Netflix began its original content splurge some seven years ago now, it started off with a budget significantly smaller than $6 billion – so the scales of time are relevant.

There is no doubt however that Apple’s $6 billion spend – and every other figure listed in this article for that matter – will balloon further still, with gross underestimations commonplace in content production, combined with signs Apple will get involved in buying major sports rights to distribute OTT. Indeed, on the hardware front, we have seen Apple TV edge closer to BT Sport through a partnership with BT’s mobile arm EE. Under this deal, EE is offering customers an Apple TV 4K box bundled with a BT Sport subscription for £7 on top of the cost of EE’s pay TV service.

Pegged for a November launch to coincide with the more aggressively priced $6.99 a month Disney+, Apple’s content release strategy is rumored to be a little different. It will apparently release the first three episodes of a series in one go, and then release each episode thereafter on a weekly basis – aligning more with the traditional TV model than the binge watching generation.

As a reminder from Apple’s “It’s Showtime” unveiling event back in March, Apple essentially placed all its streaming eggs in two baskets – betting on celebrities and reach. The latter is a no-brainer; Apple ships over 200 million iPhones a year. But while A-list celebrities adorned the stage of the Steve Jobs Theater and the iPhone maker waxed lyrical about celebrated creative artists spearheading its original content roadmap, its technology roots were – and remain – disappointingly sidelined.

Far from the lavish treatment of guests in Cupertino, Apple TV+ won’t be graced with a swanky new app but will instead reside inside Apple’s existing pre-installed TV app. This app is at least getting a revamp with more of an aggregator approach, collating shows, movies, sports, news and more in a single app across iPhone, iPad, Apple TV, Mac, smart TVs (from LG, Sony and Vizio via Airplay 2 later this year) and other streaming devices. Chromecast support wasn’t mentioned, but it would be restrictive of Apple not to add Chromecast compatibility in the future, while Apple has confirmed that support will arrive for Roku and Amazon Fire TV streaming devices.

Interestingly, data from our research arm Rethink TV forecasts that streaming revenues will account for just 5.1% of Disney’s total video revenues by 2024, compared to 8% for AT&T, 6.6% for Comcast and obviously 100% for Netflix.

Some sources claim Apple has committed significantly less than $6 billion while others dispute whether or not the notoriously tight-fisted firm will offer a free trial period. It would be suicide not to offer potential paying subs a taster but equally it would be exactly like Apple not to.