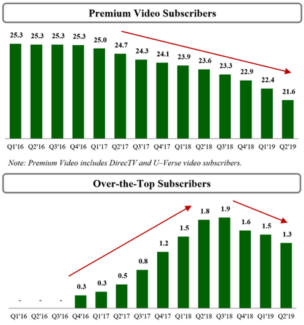 Riding high on the hype wave of its forthcoming streaming service HBO Max, AT&T probably wasn’t expecting to be brought back down to earth with a thud this week, which is what happened after an activist investor with a substantial stake in the business echoed what we have been saying for years – imploring AT&T to sell the self-imploding satellite TV business. This lambasting is arguably more embarrassing for AT&T than its last quarterly results filing, and we have seldom seen such an outright public hanging of a mammoth company by one of its own stakeholders.

Imagine your company making such a calamitous misjudgment that a minority investor, fraught with fears about sustained incompetence and contempt for trends, is driven to sending the board an extensive strategy rethink out of sheer desperation.

That’s exactly what Elliott Management, which owns a $3.2 billion slice of AT&T through various funds, has done. But the hedge fund hasn’t stopped there. In a letter to the board, Elliott Management slammed inept DirecTV leadership, after the original management team departed shortly after the takeover, as well as highlighting a confused and erratic strategy for the video streaming business built around its $109 billion deal for Time Warner. Elliott Management is skeptical of the value creation opportunities from the vertical integration from the Time Warner deal and implies AT&T risks a repeat of the DirecTV debacle.

AT&T bought DirecTV at the peak of its powers back in 2015, paying $49 billion for the brand at a time which Elliott Management’s letter points to a linear TV market at an inflection point – on the cusp of an irreversible fall from grace. Elliott essentially has the hump that no one involved in the transaction saw DirecTV’s demise coming amid an abundance of warning signs. We wonder if any disgruntled investors raised any red flags at the time of the deal. Doubtful.

But it isn’t all doom and gloom. Elliott has at least followed up its complaints with a plan of action, proposing a four-part strategy coined Activating AT&T. Above all else, Elliott proposes a strategic shift from acquisition to operations, highlighting no more material M&A, alongside comprehensive reviews of strategies and operations, and increasing management accountability and oversight. It sounds to us like Elliott is longing for a substantial executive overhaul.

Poignantly, Elliott cites the failed acquisition attempt of T-Mobile back in 2011 as the most damaging deal in AT&T’s history – underscoring how the pursuit of the then-distant fourth-placed competitor not only cost the company $billions but also single handedly created a disruptive competitor. “Unfortunately for AT&T and the industry, AT&T paid the largest break-up fee of all time and provided T-Mobile with a seven-year roaming deal and the invaluable spectrum it needed to develop from a then-struggling competitor into the thriving force it is today,” reads the letter.

Elliott Management is seriously peeved with AT&T’s M&A track record and is pulling out all the stops to avoid future misspending. “Even aside from the questionable strategic fit of its M&A, AT&T has spent far too much of the past decade in acquisition mode. Acquisitions require a significant allocation of time and resources – both capital and employee time – that AT&T has been unable to spare. Beyond just the organizational distraction, this constant barrage of M&A leaves investors (and employees) in a state of wondering “what’s next,” especially given AT&T’s history of stacking acquisitions in close succession,” Elliott continues.

All in all, Elliott Management expects its strategic rethink, involving divestitures of DirecTV along with pieces of the wireline footprint and other assets, to boost AT&T’s share price above and beyond $60 per share by the end of 2021, reflecting a 65% upside on today’s share price. “This share-price underperformance has occurred as AT&T’s M&A strategy has taken it into multiple new markets over a series of deals totaling nearly $200 billion, and as its operational performance has measurably declined. As a result, AT&T today is deeply undervalued.”

Rather fittingly, we ran the headline ‘Beginning of the end for DirecTV as AT&T TV Now mouthful preferred’ very recently in our August 1 issue reporting on the rebranding of DirecTV Now to AT&T TV Now, a move we described as not only AT&T turning its back on the satellite TV market but also a major marketing mishap. Elliott Management agrees.

“DirecTV Now (renamed AT&T TV Now), has been poorly executed with delays, technical mishaps, weak customer service and usability issues. Despite describing DirecTV Now as a replacement for DirecTV, the natural-substitution narrative has not played out. While unsustainably low prices and aggressive promotion did initially help the product scale, the benefits turned out to be very short term in nature. As AT&T raised prices to normalized levels, results rapidly deteriorated. After just two years of existence amidst an otherwise-booming OTT market, DirecTV Now’s subscriber count is now declining,” writes Elliott Management, outlining figures in a couple of graphs we have included below.

As the graphs show, AT&T suffered total video losses of 946,000 during the second quarter of 2019, incurring 168,000 DirecTV Now cancellations on top of a satellite TV mass exodus of 778,000 subscribers. The US operator is precariously close to churning out 1 million subscribers a quarter and rising fast, which would see its 22.9 million existing video footprint (21.6 million satellite and 1.3 million DirecTV Now) disappearing in maybe 6 or 7 years if this snowballing effect intensifies.

AT&T’s broadband business also came under fire. “Even the overall broadband and video deployments merit scrutiny: Misjudging consumer demands for broadband speeds has rendered the original Fiber to the Node (FTTN) deployment suboptimal, while the losses at U-Verse served as a justification for the ill-timed acquisition of DirecTV.”

Despite its serious connotations, reading Elliott Management’s pleas paints an amusing scenario akin to a pupil taking a class into their own hands, proceeding to sit the teacher down and lecture them on how to do their job – and doing a decent job of it too. AT&T’s response should be a thing of beauty.