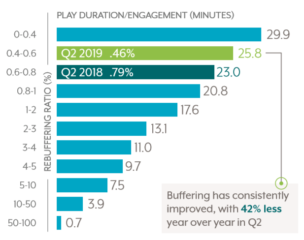 Reports and opinions from all corners of the industry have occupied this week’s summer lull of video technology announcements. UK regulator Ofcom was at it with its Media Nations report, showing a huge streaming spike misinterpreted by the BBC as a win for linear TV, while Nagra came out with results from another Pay TV Innovation Forum survey – revealing how operators continue to massively downplay the disruptive role of OTT video.

But it was the Q2 State of the Streaming Industry report from Conviva which really tickled our fancy. While celebrating the rise of ad dollars in OTT video and highlighting the major unfulfilled opportunities in ad-supported content, the QoE analytics vendor also declared a streaming ad crisis.

Conviva has sounded the alarm based on data showing that when viewers exited or refreshed a piece of content before making it through 5% of a title, marking the magic point of no return according to Conviva, pre-roll ads recorded an average rebuffering ratio of 1.6%. But when a viewer passed the engagement threshold of 5%, pre-roll ad buffering averaged just 0.4%. The report doesn’t make it clear however if this data relates to ad-supported on-demand content or live streaming, or both.

We’d love to see a comparison between on-demand content with and without ads of the proportion of viewers who passed the 5% mark when there was no buffering and slight buffering on each.

Such advancements meant video start failures dropped to just 1.38% and average rebuffering ratio declined to 0.46% in Q2 2019 from 0.79% in Q2 2019 – resulting in a 12% increase in engagement. Quality and engagement are naturally connected but, even so, this 12% engagement spike is surprisingly high – again underscoring the importance of picture quality as a direct correlation to churn and effective monetization.

Aside from the critical QoE data, Conviva also included a few fun figures, breaking down streaming data from the top 15 markets in the US with intriguing results. Taking top spot for video consumption per head wasn’t San Francisco or New York, but Dallas, recording streaming video consumption 44% higher than would be expected for its population size.

Additional findings showed that VoD content accounted for 66% of all viewing hours during Q2 2019, rising from 59% in the same period last year.

From OTT video to pay TV, let’s give Nagra and MTM’s survey results a little time in the limelight.

“Many executives see OTT offerings as simply another category of content offering to be aggregated and offered to subscribers on pay TV platforms,” reads one of the most starry-eyed and hypocritical statements we have ever had the displeasure of receiving here at Faultline Online Reporter – and we have received our fair share of pay TV industry cover stories.

Aggregation, quite frankly, is a term legacy pay TV operators are circulating frantically as a medium for increasing ARPU for their dwindling cable and satellite subscriber bases – in doing so giving the illusion of a healthy business model.

At least this is a statement we can get on board with, although somehow the same respondents who admit that radical restructures are required, cannot confess that OTT video – or “simply another content category for pay TV” – is the root cause of this restructuring.