Net income surged 65% year on year to $665 million from revenues of over $5.2 billion, a 31% annual increase. Like any business, marching towards increasing profit margins has not been an easy journey for Netflix, as we have plotted in the chart below. The graph shows a clear spike in net income over the past two years, correlating with an injection of additional streaming asset spend. The concern however is that the gap between the two is widening, although you cannot argue against the company successfully implementing its transformation from second-run content provider into original programming powerhouse.

Additions to streaming content assets topped out at $3.65 billion for the third quarter, rising from $3.24 billion over the same period a year ago. With Netflix reaching 158.3 million global streaming paid memberships, it means a content spend per subscriber of approximately $23 during the quarter, down from about $25 per subscriber a year ago. And at a monthly ARPU of over $9 in the US, rising 12% over the previous quarter, Netflix is in a comfortable position and proving almost everyone wrong.

It’s also worth noting that while content investment continues to climb, Netflix is sustaining this spending spree at a slower rate growth rate than revenues and the objective now will be to bring this is in line with net income’s growth curve.

Netflix is now on course to surpass 165 million subscribers worldwide before the close of the year, picking up nearly 6.8 million new subs in Q3 – of which 517,000 came domestically (totaling 60.6 million) and 6.25 million internationally (totaling 97.7 million). The latest influx brings domestic subscriber gains to nearly 3.7 million for the full year period, while the international footprint has increased by 24.2 million subs year on year.

These quarterly subscriber gains were below Netflix’s own estimations but a major improvement on the 2.7 million subscriber additions in the previous quarter which whipped up a media feeding frenzy.

In ongoing frenzies, with these being the last quarterly results published by Netflix prior to the arrival of Disney+ and Apple TV+ in the coming weeks, the emphasis on the streaming wars has never been greater.

CEO Reed Hastings again addressed this during the company’s earnings call. “It is interesting that we see both Apple and Disney launching basically in the same week after 12 years of not being in the market. But fundamentally, it’s more of the same, and Disney is going to be a great competitor. Apple is just beginning, but it will probably have some great shows, too,” he said.

Friendly words from Hastings considering Disney recently turned up the heat by blocking Netflix advertisements from all its TV networks with the exception of ESPN.

Last week, we suggested investors in Disney+, Apple TV+ and even HBO Max might gulp once Netflix’s third quarter results arrived as the true size of the task ahead towards profitability became apparent. We refer those same investors to the simple graph above.

A common misconception in the streaming battleground is that Netflix has everything to lose. But in reality, with multiple OTT video subscription households on the rise, the real casualty here will be traditional pay TV.

Hastings agrees, stating, “All of us are competing with linear TV. We’re relatively small to linear TV. So just like in the letter we put out about the multiple cable networks over the last 30 years not really competing with each other fundamentally but competing with broadcast, I think it’s the same kind of dynamic here.” 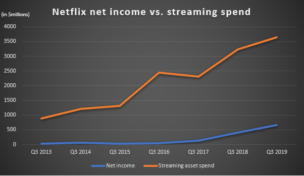