Charts and graphs cannot always tell a thousand words, and in the case of Netflix’s 2020 performance, a little more than a thousand are needed to capture a defining and historic year in the SVoD heavyweight’s legacy.

The headline-grabbing highlights for Netflix saw it storm past 200 million subscribers in Q4 2020 – adding 8.5 million new global paid streaming memberships to end the year on 203.7 million subs. However, while the fourth quarter fell short of the first and second quarters in terms of new subscribers, Netflix recorded its highest quarterly revenue of the year in Q4 – and a new quarterly company record – at $6.64 billion.

A notable trend, however, is that Netflix could not – or rather decided not to – translate that revenue spike into profitability, which is really an ongoing theme of Netflix financials. Instead, Netflix continues to plough huge portions of revenue back into content production in pursuit of its self-sufficient content strategy – much to the ongoing annoyance of investors.

Consumers, meanwhile, are delighted – with Netflix promising to release at least one new movie every week for the next 12 months. You would be mistaken for thinking Netflix plans to reach this ambitious target by churning out a mix of original and licensed titles, as Netflix does not do things by half. This is a 100% original content strategy promising at least 52 new original Netflix movies this year.

No movie studio on the planet can possibly keep pace with that, not even Hollywood titan WarnerMedia, which has committed to 17 movies for release straight to HBO Max in 2021. The two strategies have of course received wildly different receptions, with WarnerMedia’s decision to cut out cinemas receiving backlash for ultimately taking money from the pockets of filmmaking circles. Meanwhile, Netflix titles have never hit cinema screens so there is no one to upset (although the cinema industry has targeted Netflix in the past, when it was infamously shunned from Cannes Film Festival). Getting to the point, these are fundamentally identical strategies from Netflix and WarnerMedia.

Now this is important because analyst firms have decided to focus on setting up 2021 as a year where SVoDs will struggle, which is not entirely false but is somewhat misleading. While subscriber uptake is bound to be slower in the wake of last year’s across-the-board influxes in OTT video, this is of course all relative, as the scales naturally balance out in 2021.

Those that have prepared their businesses for a slowdown will be best positioned to use 2020 and all its accelerated trends as a springboard to survive the tough months ahead. Preparation such as cushioning subscriber churn by committing to unprecedented levels of content production to keep viewers engaged right across the genre spectrum. For Netflix, this has initially come at the sacrifice of a more profitable quarter, while the long-term implications for the business will be much greater, particularly with competition arriving from Disney+, HBO Max, and now Discovery+.

Inspecting the balance sheet more closely, we note that fourth quarter net income was 2020’s lowest by some margin for Netflix, at $542 million compared with $790 million in Q3, $720 million in Q2, and $709 million in Q1. However, it speaks volumes that Netflix is projecting another record breaking revenue quarter at more than $7.1 billion for Q1, a 23.6% increase over the previous year. Hitting this revenue target will drive record net income of $1.35 billion – an incredible 91.1% rise on Q1 2020 and a 150% increase on Q4’s net income.

While most trends were launched out of various windows throughout last year, certain underlying patterns remained intact and prominent. The slight slumps in weekly paid net subscriber additions that were evident towards the ends of Q2 and Q3 2020 were once again non-existent in Q4, following the usual plot line of spiking right around Christmas time as viewers hunker down, as the graph below demonstrates. 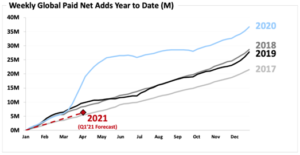 Again looking into Netflix’s own crystal ball, a slow start is forecast for 2021 with 6 million paid subscriber additions in the first quarter – a fully expected deceleration from the 15.8 million sign-ups in Q1 2020.

But while Netflix’s modest first quarter subscriber projection gives off an aura of caution,

the projected financials suggest any anticipated 2021 slowdown is not even on Netflix’s radar. Few things are certain in life other than taxes and death, as the saying goes, to which we would add the inevitability of Netflix breaking new records and setting new standards for the video industry.

Turning our focus from the financials now, there’s time to squeeze in a few words on some new features Netflix is preparing to roll out this year.

The linear TV feed feature being tested in France is a work in progress, according to Netflix COO and CPO Greg Peters, who said during the company’s earnings call this week, “It’s still unclear how that’s going to work out.”

This linear TV trial feature has been coined Netflix Direct, in an opportunity for Netflix to capitalize on a market of cord nevers – those who have never used a truly linear traditional broadcast and cable TV experience – as well as a market of millions who are simply fed up with browsing.

Peters spoke more confidently about a separate feature Netflix has been testing for global roll out, where users can indicate that they want to skip browsing entirely at the click of a button – triggering a title to play at random.

This sounds very much like the Shuffle feature Netflix has been teasing, although the fact Peters – nor any other member of the Netflix executive team for that matter – did not mention the word shuffle once suggests an alternative name is in the pipeline. Indeed, the shuffle button has become synonymous with Apple having pioneered it with iTunes, a baton which has been picked up by music streaming services such as Spotify, so Netflix might want to write its own shuffle chapter in the SVoD story.

That said, shuffling the Netflix deck of cards will be so much more complex than hitting shuffle on your iPod. The feature cannot be totally random or veer too far outside a viewers’ usual comfort zones, or subscribers will simply boycott the feature from the moment it spins up a Romcom on the screen of a Sci-Fi fanatic.

The more data Netflix has on you, the better your personalized shuffle experience should be. But, at the same time, this cannot simply be an extension of the recommended titles carousel view – it must be a feature in its own right.