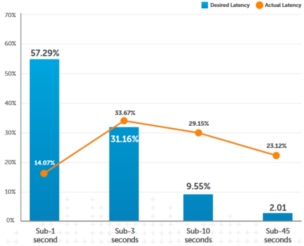 A survey from Wowza, which has polled broadcasters, has demonstrated the gap between today’s performance and tomorrow’s dreams. The most interesting takeaway is that 52% of live streams have more than a three-second lag, according to the results.

Wowza warns readers not to misinterpret the graph, as the sub-3 seconds category is the largest – on 33.7%. Only 14.1% report less than one second of latency. Wowza says that standard TV clocks in around 5 seconds of latency, meaning that around half of OTT broadcasts are behind traditional cable and satellite.

Wowza’s categorization asks for the typical latency. The 14.1% in sub-second latency fall under the Near Real-Time banner, which include communications and device remote control. The sub-3 second group that scored 33.7% includes user-generated content (UGC) live streams, cloud gaming, and eSports streaming. Sub-10 second scored 29.2%, and this is where our OTT providers and news and sports are found. The sub-45 second club accounts for 23.1%, and mostly consists of one-way broadcasts.

Unsurprisingly, the newer transport protocols are found in the lower latency use cases. WebRTC accounts for all of the sub-second usage, but just outside that band lie SRT and RTSP/RTP. Once we pass the sub-two second band, we see Low Latency HLS, Low Latency CMAF for DASH, and RTMP Tuned, which Wowza groups together. RIST is conspicuously absent.

The data puts RTMP at the 5-second mark, putting it on par with the typical cable and satellite latency, with HLS Tuned and DASH Tuned just about getting into the 10-second band. After that, Apple HLS and MPEG-DASH are major outliers, reported at the 30-second mark.

So, Wowza’s data shows that the gap between the target and actual latency is really quite painful at both extremes. As the sub-second technologies are still emerging, it is not quite fair to say that the gap is worse at the bleeding edge than at the slower end, but that there is such a prominent gap between the sub-10 and sub-45 that it points to fundamental problems in the industry.

It feels that in the year of our lord 2021, having less than 45 seconds of latency for a stream should be table stakes, and yet, it seems that 23.1% of streams are afflicted with that. Based on typical home broadband connections, you could buffer the bulk of a 1080p film in that amount of time, and yet it seems to take a significant chunk of workflows that same amount of time to move packets through a network.

A later question gives some more context. When the audience of broadcasters was asked whether they had implemented specialist low latency streaming systems, only 54.3% responded affirmatively. A choice answer that Wowza highlighted reads “latency is not important. Who cares if the stream is delayed a few seconds? Heck, even a few minutes. It’s not like our viewers would even know.”

Sports viewers watching national events can definitely tell when their streams are delayed, based on the cheers of their neighbors, and while that attitude is probably an outlier, it speaks to the disdain that some broadcasters hold their audiences in. Worse, some of the top answers suggest that the broadcasters are going to be difficult sales targets for low latency vendors too. The market is not short of low latency hype, but these answers indicate that broadcasters are not interested – for now at least.

Wowza also asked about the streaming formats used for ingest. RTMP remains number one, with 76.8% of respondents using it. WebRTC placed second, on 24.7%, and Wowza expects that to grow quickly. SRT is in third, on 21.1%, with RTSP in fourth on 18.6%, and Other scoring 11.3%.

The reason that Wowza expects WebRTC to grow quickly on ingest is because WebRTC is growing on the delivery side of things – scoring third place among respondents, on 28.4%. Unsurprisingly, HLS is used by 70.6% of respondents, and notably 21.1% of them have implemented the low latency version of it. MPEG-DASH is in second, with 30.4%, but far fewer are using low latency CMAF for DASH – just 3.6%.

As for the largest delay in a workflow, the respondents were split fairly evenly across the board. Moving through the process, Encoding scored 19.3%, followed by First-mile Upload on 6.3%. Transcoding and Packaging scored 17.7%, with Last-mile Delivery hitting 20.8%. However, the highest score was “I don’t know, it just feels slow,” with 23.44%, which speaks to a gap in the market for some specialist analytics providers.

The final question in the survey was specifically about the low latency technologies that respondents plan to use in the future. Some 58.2% cited Low Latency HLS, with 43.4% pointing to WebRTC. The SRT protocol scored 33.3%, and Low Latency CMAF for DASH was just 23.3%. Again, this does not speak to the volume of video served by these protocols, but it does appear that the CMAF variant for DASH is out of the running.

As for some less technical points, in terms of the type of content being streamed live, Sports took the top spot, on 19%. However, as an indicator of the breadth of uses, the Other category takes second place, with 16.5%, despite there being 15 other possible choices of answer. Conferences, Tradeshows, and Conventions took third place, with 13.5%, with Corporate Communications in fourth on 11%, and Video and Audio Chat in fifth, on 8%.

Notably, Gambling is so small that it rounds down to 0% in the chart, with Auctions and E-commerce both on 1.5%. Using live streams to sell merchandise is often cited as a strong growth area, but in terms of users, it is rather small.

However, these charts are not conveying the volume of video streamed, nor the size of the audience. Faultline’s interest areas are a handful of these use cases, but Wowza does note that the third-place conferencing use case has the pandemic to thank for its placing.

When asked about the most important UX factors, high video quality was the most important feature cited, at 41.7%. Low end-to-end latency was second, with 32.2%, which conveys that the end user is not going to be happy with a choppy video, even if it has been delivered as fast as physically possible. As a hint at future use cases, real-time interactivity was third, with 14.6%, and the ability to scale was fourth, with a lowly 11.56%.