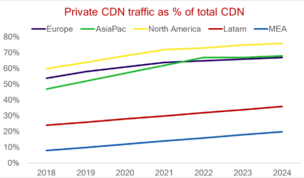 Vendors and service providers far and wide across the OTT video landscape are positioned to prosper greatly from the rise of CDN revenues, triggered in part by the adoption of protocols including Secure Reliable Transport (SRT) which are fundamentally altering the industry’s technical foundations.

While North America rules the roost today in terms of CDN IP traffic by region, hovering at around 50 Exabytes (EB), Asia Pacific is forecast to blast past the rest of the world in 2021, going on to around 250 EB by 2024 and leaving North America in the dust at 150 EB by this time. While AVoD will spearhead Asia Pacific’s rise and North America and Europe will continue to thrive from SVoD services, they will be dwarfed however by live video streaming traffic and that is the entire essence of the latest report from our research arm Rethink TV entitled SRT triggers live video surge – bigger than SVoD.

Data shows that live streaming traffic will surpass non-live video traffic between 2023 and 2024, mounting from 11 EB in 2018 to an exorbitant 238 EB in 2024. The big story however is that total revenues from SRT traffic will reach almost $10 billion worldwide by 2024, booming from less than $1 billion. Interestingly though, while Asia Pacific will dominate for total CDN IP traffic in five years’ time, North America will just edge the race for SRT traffic revenues, although Asia Pacific is closing in hard and fast and looks set to overtake North America further down the line.

This is an impressive feat considering SRT only became available open source in March 2018, after the evolution began in infancy back in 2013 developed by Haivision. Protocols like SRT operate at the network transport level rather than the application level, providing secure transport at lower latencies between transport stacks within an IP network, leaving it to the application to ensure security, reliability and low latency to the end user.

A key design goal in the revolution was to combine the reliability of the connection-oriented TCP transport protocol, with its built-in retransmission of lost or corrupted IP packets, with the broadcast qualities and lower latency of the connection-less UDP protocol. Connection-oriented transmission involves establishment of a dedicated path between source and destination stacks for the duration of a session, while connectionless protocols fire packets out with no determination of their destination, being therefore suitable for broadcast and multicast where the end points are unknown at that time anyway.

One caveat from the report however is that some revenues could also be associated with another live streaming protocol RIST (Reliable Internet Storage Transport). Of course, with both technologies being open source there are no immediate revenues, so Rethink TV has calculated costs of transmitting the associated traffic.

Another important trend is that heavyweight streaming providers are being nudged towards private CDNs, following in Netflix’s footsteps which has obviously proved a successful advocate for achieving scale with consistent QoS. Of course, Netflix doesn’t offer any live video content today, but we continue to see the SVoD pioneer as a benchmark for all things streaming, and it’s worth noting that these private CDNs exploit publicly available cloud infrastructure to solve the scaling problem.

As a result, private CDN traffic in North America will account for approximately 70% of total CDN traffic by 2024, the highest of any region and rising from 60% in 2018, shows the report. Unsurprisingly, the most striking private CDN growth will come in Asia Pacific, as shown in the graph below.

The report also factors in peer to peer CDNs which have become increasingly prominent in the same time that SRT has enjoyed its own rise. It notes P2P’s primary appeal being the inherent scalability since almost by definition capacity is proportional to number of users. Momentum, despite being generally positive, has been constrained by the latency question which has led to some new CDNs that are dedicated to live video taking a traditional server-based approach, according to Rethink TV.

“Observers of the IP scene will see that this brings the evolution of video streaming full circle back in a sense to where it began. After all the Real Time Streaming Protocol developed by Real Networks was the first to be widely deployed and that was UDP-based, as were the HTTP-based streaming modes that followed. TCP then ousted UDP in both environments and became the dominant streaming transport foundation for HTTP-based ABR because of its robustness. Finally, the growth of live streaming then tilted the dial back to UDP, but this time with more attention to error correction, aiming to have the best of both worlds,” states the report.

Aside from the live streaming boom, Asia Pacific’s CDN IP inflation will be dominated by AVoD services, while North America and Europe will benefit more from the rise of SVoD, although research notes that SVoD growth in Asia Pacific will too be significant. Rethink TV anticipates AVoD revenues scaling $25 billion by 2024 with China accounting for about 60% of those and India almost 30%, while SVoD will total around $18 billion. By share, AVoD will account for 55% of revenues and SVoD 36%, with the remainder picked up by TVoD services on about 9%.

For more information on the report and to request an executive summary please visit our website or contact [email protected].